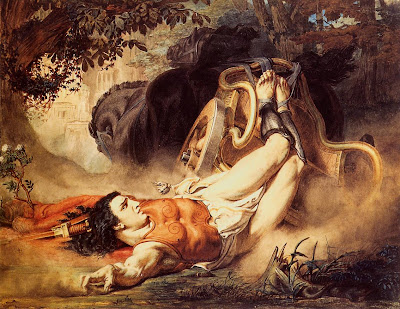 Can Henze's grim Phaedra be a love story? Hippolytus is lusted after and betrayed, both by Phaedra his stepmother and by the Gods themselves. He's dismembered, caged, taunted, his very name forbidden. And yet steadfast he remains to Artemis, his goddess, though even she/he cannot change the cycle of fate.

Hearing Phaedra in a concert performance at the Barbican, London, confirmed its stature. The premiere, in Berlin in 2007 astounded because the staging was brilliant. (please see THIS link for more) This time, the focus was on the music. With Ensemble Modern and Michael Boden conducting, and the same cast as in Berlin, the impact was raw and visceral.

Phaedra begins not with Phaedra but with the Minotaur. The long introduction (which starts in silence) is like the Labyrinth in its circuitous,, circular patterns, dead ends heralding changes of direction. In Berlin, the orchestra was filmed as they played, their image projected on stage, confronting the audience. Although this is an opera, the non-vocal, abstract narrative is very important. Already in this music, we can hear the "empty shafts" of the cave in which Hippolytus (Hippolyt in German) will be imprisoned.

Just as the Minotaur roams the Labyrinth, Hippolytus roams the forest. He's devoted to Artemis (Diana) the goddess of hunting, so it's a sacred act, of devotion, not hunting for its own sake. "Death holds (Hippolytus) balanced like a spinning top", sings Phaedra. Humans are toys, at the mercy of some inexorable, almost mechanistic fate. Henze writes the part of Hippolytus very high, so as to convey the unworldly spirituality of the role, for Hippolytus is fundamentally innocent, a foil for the unethical machinations of those around him. John Mark Ainsley has no problem with this, having sung dozens of baroque figures in the past. Yet he also brings convincing strength to the part, with his firm centre. Hippolytus is a hunter, a man of wild, free spaces. Ainsley sings like an angel, but has physical presence. His Hippolyt moves like a huntsman, as intuitive as the animals he hunts. When he himself becomes trapped and caged, the agony Ainsley expresses through his voice is almost painful to witness.

Hippolytus hunts, not for sport, but as an act of worship. Artemis, to whom he is devoted, is the goddess of hunting, which in pre-modern times provided food to the community : a source of life. This gives a sinister, darker meaning to Phaedra's jealousy, and that of Aphrodite. Hence, Henze links Hippolyt to the Minotaur. Both are sacrifices, destroyed by others with ulterior motives. Lauri Vasar's Minotaur is a good balance to Ainsley's Hippolyt. At the Barbican, he wore the same elegant dinner jacket as he did in Berlin, to emphasize the concept of the "beast" as more civilized than those who taunt him. Mythology isn't lost on Henze. The idea of Theseus's son being killed by the resurrection of the Minotaur is another elliptical pattern in this opera, itself constructed like a maze.

And with this denial of innocence comes the sterility of death. Henze writes Phaedra's part with many moments when song fails, and Maria Riccarda Wesseling has to sing almost unaccompanied, alternating between half speech and mechanistic incantation. Her music replicates the twists and turns of the "Labyrinth" music, with its dense flurries and false leads. Phaedra and Aphrodite are a pair, one mortal, one divine, and in the Berlin production were treated as mirror images, reflecting an important theme in the opera. Concert staging benefits Wesseling, who sang with much more confidence than she did in 2007, when she was a late replacement for Magdalena Kožená. She's definitely grown into the part, expanding the role with greater nuance. Marlis Petersen's Aphrodite has developed too, and is more distinctive and individual.

If anything, the Second Act is even more bizarre than the first. Artemis reassembles Hippolytus but the catch is that he has to assume a new name and identity and live in a cage. A bit like marriage. By this stage Hippolytus hardly knows whether he's conscious or dreaming, yet his faith in Artemis is undimmed. Like a bird in an Eygptian myth, Phaedra, too, rises from the dead. Hippolytus the hunter is now the pursued. His body may be restored but without freedom to roam he cannot hunt and is cut off from expressing his love for Artemis, that equivocal male/female figure that holds him in thrall, though he/she can't really help him back to what he was. Axel Köhler's voice is deepening in his maturity, but that's perfect, because it intensifies the ambiguity. that perhaps is what draws Hippolyt to her/him in the first place.

Tempests and earthquakes, cosmic events that further the plot where no human logic can prevail. Hippolytus resurrects yet again, at last as The King of the Forest. As Paul Griffiths noted this may be a reference to Henze's 1956 opera, König Hirsch (Stag, the King of the Forest) which makes sense, for it reflects the recurrent mirror imagery in Phaedra. Indeed, after hearing the Adagio in Elogium musicum (2008) where "eagles fly, and larks and swallows chant many thanksgivings" the reference to Henze's own love, recovery and life is implicit.

At the Barbican, the lights suddenly dimmed, menacingly, as if the hall were about to collapse. It was a wonderful coup de théâtre, achieved by simple means but very effective. Similarly, Henze uses only 23 musicians, augmented by electronics so surreal that it's clear this isn't a naturalistic storm. There's more here than wind and rain, for Henze is creating something metaphysical. (Again, presages of Elogium musicum, with its tortured second movement Nox, referring to "eruptiones, ruinae atroces, nocturni stridores". Indeed, even references to the supernatural trauma in Six Songs from the Arabian, an extremely important song cycle which needs more appreciation (I'll write about that when I have time).

As The King of the Forest, Hippolyus represents spring, regrowth, renewal. The dense, twisting textures of the earthquake and of the Labyrinth music give way again to light, lucid clarity, vernal flutes and pastoral sounding horns. "Ich bin hier, in meinem Anfang" sings Ainsley, with a lovely sense of wonder. (Here I am at my Beginning). Anyone who has ever cared for someone terminally ill knows how people revert to a vulnerable baby-like stage in extremis, as if returning to the safety of the womb. It's incredibly humbling. And so, Phaedra ends, not with chaos but simplicity. "Born naked, we advance toward mortality". We are in a clearing in the forest. The woods will close in again, but so too will there be other clearings. The cyclical symmetry, the mirror images, the pairing of past and future in Phaedra make it a powerful experience.

Please see 15 other posts on Henze on this site including one on Elogium muicum, another on the Berlin Phaedra and more to come)
at January 18, 2010