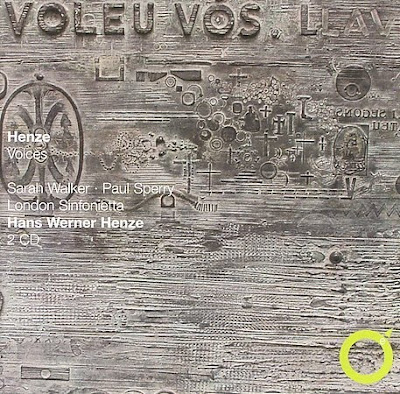 This release is the premiere recording of Hans Werner Henze’s Voices. It’s conducted by the composer himself, and performed by the London Sinfonietta, for whom it was written. This alone would make it a must-hear, but on its own merits it is by far the most lucid and idiomatic performance.

Voices is a kaleidoscope of songs from different genres, expressing Henze’s belief in the fundamental unity of the "people" of the world. Unlike, say, Tan Dun, Henze doesn’t attempt to adapt non-western music into his own, because no outsider can really assimilate forms which have evolved over centuries. He sticks to what a westerner might relate to, such as North and Latin American idioms. Instead, he minimalises his writing, creating understated, unobtrusive settings, giving the text prominence. Thus we have the powerful "voice" of Ho Chi Minh’s Prison Song, unadulterated by pseudo-orientalism. The only exotic touch here is the simple, reedy flute melody, which could belong in any Third World culture.

Nonetheless, where it helps, Henze incorporates styles that extend the impact of his songs. His many years of living in Italy have informed his writing style, so he adapts Italian folk idioms with ease. Caino is a song from the Italian wartime Resistance. The poem is about a German soldier, lying dead by a stream, his hair flowing in the current like a "soft weed". Flute, guitar and accordion provide a minimal, but plaintive background, as winding and limpid as the stream. Sarah Walker’s voice captures the pathos, but there’s no mistaking, when she sings "Perchè, soldato tedesco?", that this is a powerful anti-war statement, even though it sympathises with a dead enemy.

The notorious Electric Cop isn’t fake Americana so much as a savage collage of images from television and bad movies. It is a song which can easily descend into embarrassing corniness. Until now, it was my least favourite in the set. I’d fast forward when it came on. However, this performance has made me realize just how coherent it is, musically and conceptually. Henze puts in gunshots and a tape of a political rally, not for mere effect, but because he’s building up a dense collage showing how we’re assaulted constantly by mindless sound. Paul Sperry’s singing shows how carefully Henze has caught the idiomatic, broken lines of the poem. The flamboyant Hispanic ending suddenly makes sense. It’s joyful dance, complete with maracas and horns, coherently expresses something real, unlike the barrage of sound that’s come earlier. Having Henze conduct probably made all the difference to this masterful interpretation.

Ultimately, Henze’s panorama is a vision of all humanity, despite the vignettes of America, Italy or Germany. Tellingly, one of the most passionate performances is Sperry’s account of the murder of 42 schoolchildren. During the Vietnam war "What have we learned", he intones ominously, "From Guernica and from Poland. From Coventry, Stalingrad, Dresden, Nagasaki, Suez, Salkiet?". I first heard this song in a film about Voices, where images of bombs and maimed children filled the screen. The impact was such that I’ve never forgotten it, nor recaptured the impact from other performances. On this disc though, it’s overwhelming. Although I can’t be sure, I vaguely remember that this was the recording used in the film. Chances are, it was. This version is truly visceral.

Voices was written to capitalize on the London Sinfonietta’s formidable strengths, their chamber sensitivity and their fluency with unusual instruments. Henze uses two or three solo instruments in groups, creating textures which shift weightlessly as one group gives way to another. The double bass frequently provides an anchor holding lines together – there’s almost no drumming, and even the brass is played with restraint. Sometimes, the musicians have to hum, their very voices expanding the human aspect of orchestration. This humane quality is supported by the use of instruments like accordion, harmonica, mandolin and recorder, all humble instruments that don’t need virtuoso players per se. When played as sensitively in ensemble as this, they become compelling.

For example, in the song The Worker, a man is killed in an industrial accident. The machines don’t stop, but continue "whirling and buzzing and humming". This is evoked in the accompaniment, literally hummed by the orchestra, sounding at once like machines and like a strange church choir. The man may be humble but the song makes him noble. The Sinfonietta is infinitely better suited to this music than Neumann’s East German orchestra. There really is no comparison. They are in an altogether different league. The Sinfonietta is perhaps one of the most important new music ensembles in the world. The avant-garde is the natural element in which they thrive. In their hands, Voices comes alive, vibrant with inventiveness and fluency. In this case, being conducted by Henze himself – no mean conductor, despite his pre-eminence as a composer – must have been inspiring. There’s a real sense here that all are working together towards the same vision. The enthusiasm is infectious.

The soloists, Paul Sperry and Sarah Walker are superb. This isn’t music for conservatoire voices, since it’s supposed to reflect the common man. There’s no need to belt things out like Lotte Lenya – Henze’s music is just too sophisticated and subtle for that treatment. Trexler and Vogt (the other recordings), were influenced by their understanding of the German tradition of political cabaret which stresses direct communication rather than avant garde "art" music. Thus their approach has validity.

Sperry and Walker, however, are far more focused on the modern aspects of the music. Henze may have roots in the German tradition, but he goes further musically than Weill or Eisler could ever have imagined. Thus Walker understands the inner dynamic of Screams (Interlude). There’s more to it than just screaming. She has a feel for phrasing and the variation of nuance, making sense of the way the music shapes the poems’ fractured images. Like some of the other poems in this set it’s not very good, but what Henze does with it makes it a work of art, and Walker shows us how. Walker is a much under-appreciated musician, whose down-to-earth commonsense and sense of humour allow her to approach this most esoteric group of songs and bring out their simple humanity. Her voice moves from warmth to anguish, yet never loses its flexibility and sense of conviction. These are not easy songs by any means, and being one of the first interpreters, she had to understand them from within.

Paul Sperry is extremely good, too. In Vermutung über Hessen, he curls his voice around the devious syntax "gutgläubige falten die Finger inning um Knüppel jetzt". It’s a miniature tour de force, for he sings against a cacophonic background of sounds imitating machines and the sound of a loud hailer addressing a crowd and police whistles. Yet the ebb and flow of this song is important – it veers between wild marches and ironic detachment. Again, a sense of irony brings out the true savagery of these texts. In Schluss, the orchestra imitates something between an oompah band and a bouzouki troupe, but Sperry’s singing makes clear that the nihilistic message is anything but complacent. Together, Walker and Sperry are very good indeed too, for the key duets, Das wirkliche Messer and Das Blumenfest, depend on a complex intertwining of their voices.

For years I’ve praised the only other worthwhile version, conducted by Horst Neumann in Leipzig, also from 1978/9 with Roswitha Trexler and Joachim Vogt. It’s on the Classics label but there’s also one conducted by Johannes Kalitzke on CPO 999 192. (not recommended and it's only partial) But a friend said this version was by far better. It was only available on LP for a short while, then disappeared. He’s absolutely right. While the Neumann reflects the older German agitprop tradition, this version is far more modern, much more in tune with Henze’s essential new music and international outlook. In 2006, the work was performed at the Proms and some critics dismissed it, suggesting that it was dated. If only they’d heard this livelier version! This performance is spirited and vivacious, and the music is as fresh, and as relevant, as the day it was written.