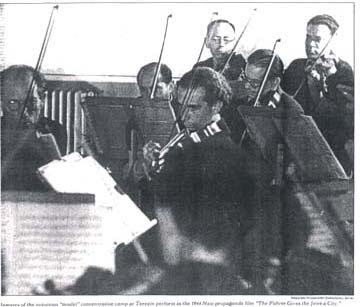 Today marks the liberation of Auschwitz, but Holocaust Day commemorates all people destroyed in that madness, and by extension, those destroyed in other madnesses. I steeled myself to watch the propaganda movie made in Theresienstadt, to show the world what a "fun" place it was. There are shots of obviously urban people merrily digging vegetable plots, looking healthily suntanned and smiling. And shots of women working at menial factory jobs (though you can tell even from these glimpses that was not how they would have been in normal times). You want to scream because you know what was really going on and what was going to happen. I won't show the film, it's awful, but the photo above is a still from it.

Then, the propaganda film shows the Theresienstadt Orchestra. Alice Sommer Herz was one of those musicians. When her mother was deported in one raid, Herz, left behind, defiantly played her piano even though some other tenants in her building were Nazis. Eventually her time came, too. As she was being taken, one of her neighbours told her "I am eternally grateful to you" he said, for the music had helped his family, too. Music saved her life, literally, for in Theresienstadt she became one of the musicians in the camp orchestra, playing over one hundred concerts. She said that even though she was starving, the idea of looking forward to playing music in the evening kept her mentally healthy. Alice Sommer Herz is still alive, aged 106.

Jacques Stroumsa arrived in camp and was asked to play a violin. He was astounded because he could not believe that music and the evil of concentration camps could coexist. But play he did, and everyone around was moved. The Nazi said he hoped Stroumsa would not die for he played so well. "I'm not planning to" said Stroumsa boldly. "You don't know", said the Nazi, "what a concentration camp is".

Anita Lasker-Wallfisch was the cellist in the camp orchestra, whose conductor and leader was Alma Rosé, niece of Mahler, and a great musician in her own right. She describes the "crazy group" of music they had to play, operettas and above all marches for the slave labourers. Once Josef Mengele visited and asked her to play Schumann's Traümerei.

Camp guards used to step in and listen on breaks from their work. Yet, Lasker-Wallfisch says, there was never any doubt that they could all be suddenly killed, and would leave the camp "as smoke". I met Mrs Wallfisch once, and told her how she'd inspired me. "Nuts" she said, "I'm not trying to inspire anyone, I'm just telling it like it is". (or words to that effect).

Read HERE about We Want the Light, a much better modern film where Herz, Wallfisch and Stroumsa speak. Please see other posts on this site about Theresienstadt Terezin music and related subject
Update: see Alice Sommer Herz, in footage made when she was 98, on the BBC IPlayer for the next seven days. (there's a lot in the archives, still unreleased). Much of this film is footage not used in the longer film. Two things she says, she learned from her mother : to be "always learning" and to "be grateful". Learning is taking on board new ideas, new experiences. Being grateful is to welcome life, "Everything is a present"
Read more about Alice Sommer Herz (A Garden of Eden in Hell) and Anita Lasker Wallfisch. (Inherit the Truth)
at January 27, 2010

Good article! But you seem to have mixed up a few orchestras -- Alma Rosé was the conductor of the Women's orchestra in Auschwitz II, not in Theresienstadt.