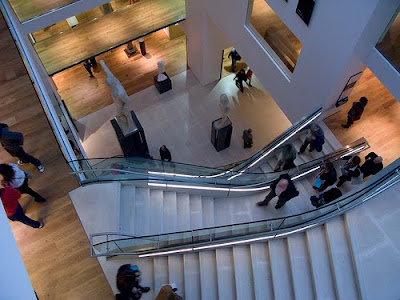 Oppressive as it was impressive the "old" Ashmolean Museum in Oxford symbolized its period. The huge marble staircase is still there but the warren of rooms is now counterbalanced by a central atrium filled with light, with smaller staircases, more free flowing. It's like a work of art in itself - an installation of light and inspiration. On one floor, seats have been placed so you can gaze on it. For more photos see Martin Beek's photostream HERE, it's excellent and informative.

The "new" airy ambience reflects the open-minded spirit in which the Ashmolean was conceived in 1683. In the Age of the Enlightenment, the wonders of the world were collected because they were stimulating and different. Among the Dutch Masters paintings, there's a still life where tropical shells are painted together with porcelain and fruit. For the painter and his viewers, this was a window on some strange, exotic paradise. The Ashmolean brought things together in a non=judgemental way - Egyptian sarcophagi, Tang horses, Roman coins, Pre-Raphaelites. By the time the V&A was built, the ethos had shifted towards a more materialist Victorian approach.

"The British have nothing to offer the Achenese". A paraphrase of a statement by the Sultan of Acheh in Northern Sumatra in the 17th century, when the British were trying to compete with the Dutch for the Indonesian trade. The doughty Achenese were not "colonized", holding out against the Dutch well into the 20th century. The phrase greets you as you enter Room 35 where there's an exhibition "West meets East". It's a lively, alternative way of looking at the way West and East met in the baroque period.

How amazing it must have been for Europeans to uncover an unlimited supply of fabulous (in the true sense of the word) consumer and luxury goods. There are sewing boxes intricately carved in ivory, western-style dining chairs of oriental lacquer and porcelains painted in vaguely western styles, but made in the potteries of central China. No Jingdezhen, perhaps no Limoges or Dresden. Think back and imagine what it must have been like, when suddenly objects like these entered western life.

As the Sultan of Acheh observed, the flow went mainly one way. Which is why the British used opium to lever their way into China, with horrific social consequences, the extent of which cannot be underestimated, even today. But there's one magnificent example of something western that impressed the Chinese. A huge French tapestry, not dissimilar perhaps to something made for Louis XIV, adorns a wall in the Ashmolean. It was a commission woven for the Qianlong Emperor and depicts bizarre animals like a tapir, a capybara, a leopard, a crocodile. All together in a woodland setting where oaks meet palm trees. No wonder they're fighting - in the tropics, crocodiles didn't often get sheep for dinner. It reminded me of another piece in the Ashmolean, an early European painting of animals in a forest fire, all standing about looking bemused.

This tapestry was stored away in the Summer Palace in Beijing, which is why the colours are so vividly preserved. How magnificent French tapestries must have been when new! Most of those we see now are faded. But the Summer Palace was razed to the ground after the Second Opium War, when a military expedition was sent to punish the Chinese for resisting the trade. The magnificent palace, a showcase of the wonders of the world, was ransacked by soldiers who had no idea what they were destroying. This tapestry was looted too, but luckily it ended up at the Ashmolean.
Later I'll write more about the Ashmolean, including its collection of musical instruments, with a Strad that's never been played since new.
at January 02, 2010