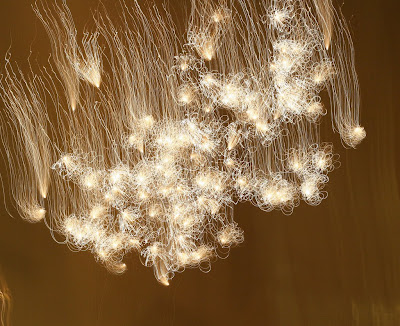 London comes back to life in January. Everything starts to happen again. So much is happening that I'm splitting it in two parts. Please see HERE for what's happening until middle of the month - lots of good thing esp the Henze weekend and several big name starry concerts, that lots of people will want to hear. The second part of the month is interesting too, but beware, multiple clashes, many things on at the same time, all good.

At the Royal Opera House, The Rake's Progress from 22/1, and Così fan tutte from 29/1. The latter is a revival of the Jonathan Miller production and the former the first revival of last year's premiere. Robert Lepage sets The Rake's Progress in 40s' Hollywood which is fair enough. The Rake is about artifice, stylized neo-classicism that isn't quite what it seemed. Hollywood is an excellent simile for Georgian London - both societies high on excess and false appearances, acting as an alternative to life. The First Act is excellent - the devil appears mounted high above on a camera crane. Theatre within theatre. Baba The Turk is Gloria Swanson in Sunset Boulevard - also a good allusion. Although the Second Act runs short of ideas, it will be worth seeing this for Patricia Bardon who stole the show last time in the role - she's magnificent!

Voice people are in for fun - after Henze's Phaedra (17th) and Gergiev's Strauss Elektra (12th and 14th), Netrebko and Hvorotovsky do a big gala at the RFH on the 18th. Joyce DiDonato's doing an all-Italian gala (even Beethoven in Italian) at the Wigmore Hall on 26/1 which is almost certainly sold out. The one I'd dearly love to get returns for is the 31/1 concert with Angelika Kirchschlager and Simon Keenlyside. Every year the Wigmore Hall celebrates Schubert's Birthday with something special, so tickets for this disappeared ages ago. Paul Lewis is also part of the celebration, playing Schubert piano pieces the night before.

Orchestrally, more big hitters. Daniel Barenboim brings the Berlin Staatskapelle to the South Bank with Schoenberg though of course the crowds will be out for his Emperor Concerto and rightly so. An odd clash with Ashkenazy conducting The Philharmonia in Elgar and Mendelssohn on the exact same night, but I guess they can meet up for coffee the next day.

Susanna Mälkki conducts the BBCSO at the Barbican on 30/1 - Webern Passacaglia, Ravel's Concerto for Left Hand (Pizarro) and Zimmermann's Photoptosis. It's a super programme and she's one of the best modern music conductors out, which is saying something. Perhaps everyone else will be flocking to the other concerts that weekend, but this is an important event, too, an excellent introduction to the 20th century. I'll be going for Zimmermann alone.

That day I'll be at a conference on Weimar music at the impossible-to-park-on-Saturday Kings Place so I'll park at the Barbican and bus/taxi. The conference is part of a short series on composers I care about intensely - Eisler, Zemlinsky, Krenek, Schreker, Goldschmidt etc. and it's supported by films of the Weimar era. Most of these films everyone knows but it will be good to see them again in context with the music. I've been doing a lot of Weimar and related cinema lately, though I don't write it all up on this blog.

Then there's the big Sibelius series at the South Bank at the same time. Osmo Vänskä conducts the London Philharmonic Orchestra. The first concert on 27/1 is unusual, not the usual symphonies but the rarer Wood Nymph and Humoresques. On 30th he conducts symphonies no 3 and 2 but interspersed with songs - Sibelius songs are wonderful, and Helena Juntunen the soloist, is very good. Trouble is, there are at least five things on this same evening. The series (like the Barenboim/Berliner Staatskapelle) continues into February. In the midst, handing the LPO baton to Vänskä, Jurowski conducts period instrument Beethoven symphonies with the Orchestra of the Age of Enlightment!

And Rolf Hind's series of new music at the Roundhouse , early opera and lots else besides! And of course tons of mainstream and chamber music, and even a piano transcription of Mahler's Tenth symphony! And I have clear forgot to include something booked ages ago - Luke Bedford at the Wigmore Hall, 24th !
at January 03, 2010