Survived both Hiroshima and Nagasaki

Tsutomu Yamaguchi survived both Hiroshima and Nagasaki. Please read a remarkable interview he gave a few years ago HERE.

"Having been granted this miracle, it is my responsibility to pass on the truth to the people of the world. For the past 60 years, atomic bomb survivors have declared the horror of the atomic bomb, but I can see hardly any improvement in the situation.” Mr Yamaguchi has just passed away, aged 93, but what he represents must never be forgotten. 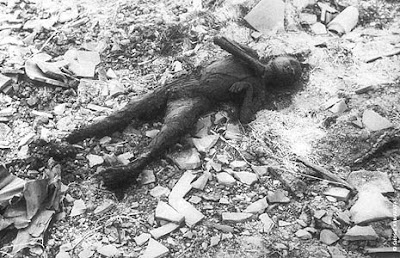 And so I dedicate a silence to Mr Yamaguchi, his son and those who shall not be forgotten. And to those still being killed because politicians play silly games.

Please see other posts on this site for more on Hiroshima and war. This photo shows a postman, innocently delivering his letters when the bomb at Nagasaki turned him into ash. See how he's clutching his throat - he didn't know what was happening, except it was agony. And his letters fell to the ground. I did find another, where some bigwig generals cheerfully celebrate with a cake in the shape of the mushroom bomb. "Piece of cake", they may have laughed, oblivious. But for obvious reasons, I can't post that. It's obscene.
at January 06, 2010

Hi Doundou,
I'm a Wikipedia editor, and I'd like to use your image of the Nagasaki post-man atomic bomb victim in the Wikipedia article about war. While this photo is certainly not pleasant, neither is war. I'm hoping a graphic reminder like this might be helpful there. Could you please tell me what you might know about the source of this photo, so I can assure Wikipedia that no copyrights remain on it, before I post it there?

I've been trying to trace the photographer too, without success because this amazing photo is "public interest". No luckl though, but I suspect that the photographer may be Yosuke Yamahata who is credited with similar photographs, many of which circulate on the internet. Yamahata was a Japanese news photographer who was in Hiroshima when the bomb fell. Althou7gh he had no idea what had happened he was sharp enough to kn0ow it was a "story" and started taking photos immediately, before the "clear up". Some of his shots are posed but most are so direct and horrific that they speak for themselves. After the US occupation, news of the bombs were heavily censored in Japan for obvious reasons, so it's quite amazing that Yamahata's films weren't seized and destroyed. During his lifetime he seems to have kept them quiet and didn't publish. He died long ago of radiation poisoning, and I don';t know if he had heirs. The photos exist all over the net, and I think there were exhibitions. But who actually owns copyright is not at all clear, in the absence of Yamahata's instructions. You might have more luck finding out. For all we know, he might have wanted them public domain, because they are educational and serve an important public purpose. And they obviously meant a lot to him though he didn't use them for financial gain.