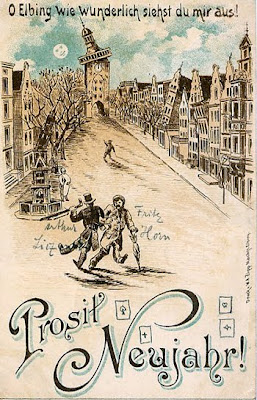 "O Elbing wie wunderlich siehst du mir aus!" O Elbing, how miraculous you look to me! In a haze of good beer and Sekt. Fritz Horn and Arthur List sent this card at the turn of the last century - see how they've written their names by the two drunks in the picture. Whoever they were, this is all that's left of them now, and even their city is changed as it's now in Poland, the original inhabitants replaced. But the market square is still there and the Clock tower, tho' most of the other old buildings were bombed flat. But life goes on, which is the most important thing.

But when Fritz and Arthur made merry, they weren't to know. So forever their moment remains, and that smiling moon which shone on them. The suits on the cards they drew are German style, possibly cards for Skat (Richard Strauss's passion).

Please see my other posts on New Year, West and East by scrolling down. Exceptional fireworks displays and party clips.

There's so much to look forward to in the New Year. Alas, the Mahler anniversary, which is not "alas" because of Mahler, the composer whose work I probably know better than any other. But "alas" because it's already becoming a goldmine for unprincipled exploitation. This anniversary might turn Mahler into a chocolate box image, like poor Mozart, and quite possibly set back Mahler studies by decades as some of the stuff around already indicates. Thank God for serious scholarship, and for serious musicians and listeners. But it won't stop the unscrupulous from rushing to make money.

Thank goodness that crass commercial types don't know who Hugo Wolf is. It's his 150th this year too. The annivesary of his death in 2003 was a good thing because suddenly the number of recordings and performances multiplied exponentially. Once it was possible to own every release, but thank goodness now there's lots to choose from, and more books too.
at January 01, 2010