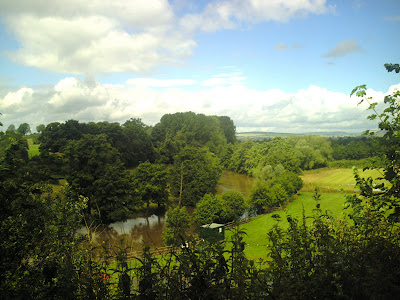 June in Shropshire, by the banks of the river Teme, the perfect image of England in summer. The English Song Weekend takes place in Ludlow 3 to 6 June. This is the absolute, ultimate Festival of English Song, lovingly organized by Finzi Friends, who know and care passionately about the genre. It's only held once every three years, so it really is a special occasion. People come from all over the world. Link HERE.

This year's schedule is good. Well chosen programmes. One's called "A Satnav of English song", with songs about different parts of England. It's one of Iain Burnside's witty compilations: Roderick Williams and Andrew Kennedy sing with Burnside at the piano.

But devotees come because this is a gathering of anyone who's anything in English song. It's a meeting place for old friends and new: great atmosphere. The talks and workshops are good, and quite in-depth. Being in Ludlow to hear Kate Kennedy analyze By Ludlow and Teme will make the performance specially interesting. Pam Blevins will talk on Howells and Gurney. Hilary Finch and Huw Watkins (who played Henze piano solos at the Barbican, Saturday) will discuss song in the 21st century. This is a progressive festival - new talent always supported. There's a competition for composers, and Ann Murray will give masterclasses.

Then there's the food. Shropshire is traditional market garden and orchard country, and Ludlow is home to some of Britain's top restaurants. More Michelin starred places than anywhere outside London, including the culty La Bécasse and Mr Underhill's, both foodie pilgrimage sites. The local market (with traditional bakers and cheese makers) is so good that you can get way above average picnic stuff too.

And of course the countryside! June is the best time to explore the English countryside, everything's lush and green. Ludlow is still well preserved, medieval buildings and an old castle, no urban sprawl, a huge area of natural woods and parkland, and of course the river. That's part of the attraction, which London cannot possibly match. The pace of life here is not, perhaps, all that different from the early years of the last century, if you lie on a hillside and look out on the rolling fields around, and hear the blackbird's song:
"Lie down, lie down, young yeoman;
The sun moves always west;
The road one treads to labour
Will lead one home to rest,
And that will be the best."
at January 20, 2010