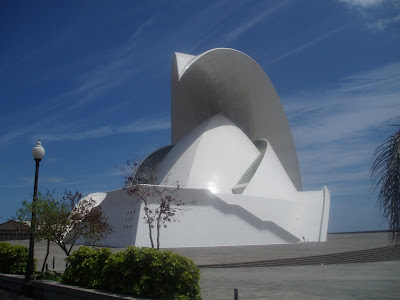 Santa Cruz hosts Staatskapelle Dresden, the Goteburg Orchestra, and the London Philharmonic? Dudamel, Jurowski, Quasthoff, Mehta and the very hip Carolin Widmann? Not Santa Cruz in California but Santa Cruz de Tenerife in the Canary Islands in the wild Atlantic.

The Festival de Música de Canarias is now in its 26th year. While the rest of Europe struggles through winter, in the Canaries, the sunshine's glorious and you can possibly go to the beach before going to a concert. In past years, the Festival's attracted many huge names, like the Berliner Philharmoniker, Abbado, Barenboim, Haitink. The Festival was founded back in the 1980's to bring good music to the people of the islands, but naturally it has attracted tourists from elsewhere - a much better type of tourist than the ones who get so blind drunk they might as well have stayed at home. It's good for visiting musicians, because the atmosphere is relaxed and free, and it's good for local musicians too because they get to play and listen at a higher level than small town orchestras in most other places.

Intrepid Traveller De chez toi, fresh from his visit to Romania for the Enescu Festival, was in Tenerife these last few weeks. Read his reports HERE with photos. He's s an especially good observer, since he lives in Mauritius, where the scenery is even more verdant, and he understands the economic ramifications.
at January 28, 2010

You have such a wonderfully wide arrays of topics here; always worth stopping by! Never a dull moment.
Thanks for posting this.
Best,
Michael

PS: I'd be interested to hear what you think of the soprano I've profiled on my blog this week...

Thrilled ! Zinka Milanove ! They don't make divas as unbland and original as she anymore ! Check out Michael's blog for soundclips and description :
http://michael-spice-of-life.blogspot.com/