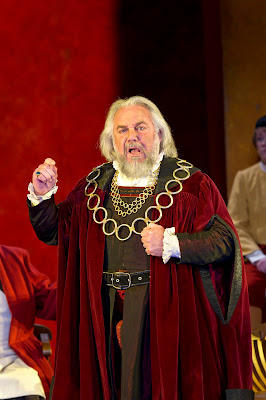 Perhaps it's no accident that Graham Vick's Die Meistersinger von Nürnberg returns to the Royal Opera House for the Christmas season. Red, green, gold, sumptuous colours that warm a long, grey evening.  This Die Meistersinger von Nürnberg is a comedy and here it's presented as the ultimate up-market Xmas show. It's extremely enjoyable, and an ideal introduction to the opera experience. Richard Wagner, though, gets sidelined.

Sir John Tomlinson is a definite reason for catching this revival while you can. The days when he could sing Hans Sachs are past, but he creates an unusually vivid Veit Pogner. Tomlinson plays Pogner powerfully, as if he was a former Sachs, whose reasons for committing his daughter to this bizarre marriage make sense. He's dedicating his daughter to art, not to shabby politics. Luckily for him, and for Eva, Walter von Stolzing arrives in the nick of time. Indeed, Beckmesser very nearly persuades the Meistersingers to drive Walter out of town. Things could so easily have turned out quite differently. Die Meistersinger von Nürnberg may be comic, but it evolves against a background of tension. At any moment anarchy could break out. Unless the Meistersingers adapt, they might not survive.

Wagner builds dissent into the music. The Meistersingers sing at cross-purposes, and in the riot scene the turbulence of the chorus evokes the violence which comes with all revolution. That's why the Night Watchman sings "bewahrt euch vor Gespenstern und Spuk, dass kein böser Geist eu'r Seel' beruck'!"  The music for the apprentice boys is energetic, a warning for those who remember Wagner's protosocialism. This time, however, we're treated to a good-natured Meistersinger, where the apprentices dance with little vigour, and the blows Sachs throws at David have no menace. Antonio Pappano received the longest applause of all on the first night. Most audiences can relate better to joyful Romaticism in music than to Wagner-on-edge, so it's understandable. He clearly enjoys the life-affirming elements in this opera, which come over well. Christmas is not the right time for radical ideas, and this is not a production that would support them. 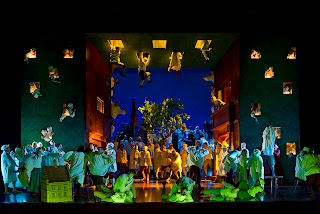 Graham Vick's riot scene is classic because it's so well imagined. The townsfolk pop out of windows and hang precariously upside down over the stage. One man looks like he's about to lose his footing (this happened in earlier productions, so it was planned)  In their nightshirts the townsfolk look like escapees from an asylum, a good idea but not developed. The Festweise scene is masterfully blocked, so each guild is clearly defined. I liked the acrobats in the background, too. But these scenes aren't for entertainment but emphasize the traumas in Nürnberg's past.(Click photo to enlarge, it's wonderful). 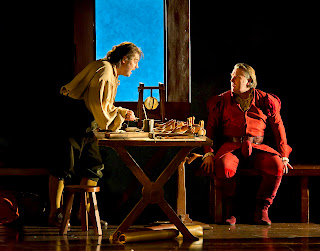 Because John Tomlinson so dominates the first Act, Wolfgang Koch's Hans Sach might be overlooked, but Koch understands the role. Sachs is an observer, who stands apart from the crowd, and who thinks before he acts.  Koch's Sachs is sung with sensitivity, and would be very effective in a more perceptive production which focusses on Sachs and not the scenery. Koch looks and sounds younger than the other Meistersingers and is rather more lyrical than Simon O'Neill's Walther von Stolzing who is more hoch dramatisch than a true Heldentenor. This was the best performance I've ever heard from O'Neill, and he was good, but it's a part better suited to a more luminous timbre. O'Neill was, however, a good match for Emma Bell's Eva, joyfully created though perhaps more Italianate than Wagnerian. In a cheerful, non-idiomatic production like this, it didn't matter, and they conveyed the story. Popular favourite Toby Spence sang a very good David, but he's more public school than roustabout.

It was good to see many teenagers in the audience, another good reason for having a show like this in holiday time. Last week, my friend took his daughter to Kurt Weill's Magical Night at the Linbury, and she was transfixed. She will never forget! We can give kids toys anytime, but the gift of a magical experiernce is beyond compare. And the same goes for adults, new to opera. This Meistersinger may not tell us much about the opera or about Wagner, but it's an excellent night out. More details soon and full cast list in Opera Today.