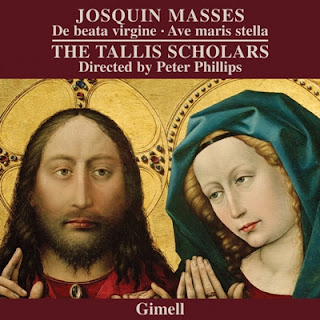 From the Tallis Scholars and Peter Phillips, a fabulous new recording of two of Josquin des Prés canonic Masses, the Missa de Beata Virgine and the Missa Ave Maris Stella.  Any recording by these performers is an event because they're astoundingly good. This release extends their on-going series of Josquin masses, recorded to the highest possible standards by Gimmell Records, with which they are so closely associated.

This disc pairs the Missa de beata virgine,  Josquin's greatest contemporary hit, with the early Missa Ave Maris Stella. It's interesting to hear the difference between the tightness of the earlier Mass and the later, which survives in many different sources. We don't know exactly what Josquin might have intended, but this non-dogmatism allows performance freedom. As Philips says in his notes, the Missa De beata virgine doesn't fit modern ideas of unified construction. Perhaps, he suggests,"Josquin was deliberately creating a virtuoso exercise in modal relationships". One of the joys of this recording is the way extra voices blend in into the usual SATB format. The Kyrie and Gloria are beautiful enough, but the Credo and Sanctus expand, and the Agnus Dei has resonant depth, so the soprano voices soar as if they were angels.

Josquin's music grows through ever-inventive paraphrases, basic motifs replicating in myriad patterns. Mandelbrot theory in sound? It's no surprise that many modern composers, like Brian Fernyhough, are drawn to Renaissance polyphony as an alternative to symphonic form. The Missa Ave maris stella is so concise that it's almost a surprise when single voices emerge from the different reiterations. For much the same reason I enjoy the Credo quarti toni (the "Cambrai" Credo) where the voices blend without losing their individuality. It's not as gloriously imaginative as the Missa de beata virgine but what lively energy!  Buy DIRECT HERE or through the usual channels.