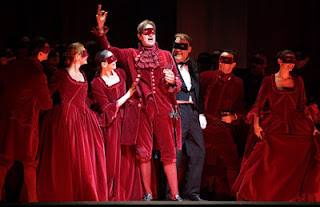 This production starts controversially. Donna Anna (delicious Anna Netrebko) tussles with Don Giovanni (Peter Mattei) .We assume it's rape, because nice girls don't do sex with strangers. But what is she really objecting to, his presence or his mask?  And how did Don Giovanni get past her defences? He's a man for whom the thrill of the chase may be more important than the act. So this Donna Anna seems to be enjoying herself while claiming to object. After all, she has a fiancé and an image to protect.  Don Ottavio (Giuseppi Filianotti suspects Donna Anna might not love him.  Netrebko sings the recititative and Mi tradì, quell'alma ingrata Non mi dir, bell'idol mio, with such passion that you wonder what private grief she's trying to suppress. Netrebko's Donna Anna is psychologically complex, not simply a victim of an attack, but of the whole  repressed, narrow world she lives in. Netrebko's performance was a tour de force of great emotional depth, haloed by exceptionally lustrous orchestral playing.

Don Giovanni is a cad but he's a charmer. Mattei is sexy, and sings with alpha male confidence, but he expresses Don Giovanni's appeal on deeper levels. Don Giovanni embraces life - meals as well as women - and deliberately flouts convention, whereas men like Don Ottavio and Masetto (Stefan Kocan) cling to it. e offers choice. "È aperto a tutti quanti! Viva la libertà!”. Perhaps that's why he only meets his match in The Commendatore (superb Kwangchul Youn) who defies the constraints of death. Mattei's Don Giovanni has animal energy, and glories in it - what kind of man keeps his own studbook? But Mattei also suggests the boyish impishness that some women can't resist. Women like Donna Elvira (Barbara Frittoli) need so much to be needed that they fall for a trite ditty like Deh vieni alla finestra.

Ultimately, Don Giovanni seduces because he fills women's fantasies. He also charms men. Leporello (Bryn Terfel) is culpable for Don Giovanni's misdeeds, but can''t break away.  Mattei and Terfel are the same age, and have created both Don Giovanni and Leporello, so it's interesting to hear them together. At first Terfel is costumed like a roughneck, which is a complete mistake. No surprise that Terfel, who knows the opera thoroughly, looks uncomfortable and doesn't sing the catalogue aria as crisply as he has done before. Don Giovanni wouldn't hire a buffoon. Once the silly costume is gone, Terfel shows why he's a match for Mattei. Their different styles bounce off each other, creating dramatic tension. Terfel sounds like he's about to explode with the violence Don Giovanni suppresses under his urbane exterior. Mattei, though, is strong enough to stand up to this savage Leporello, his elegant demeanour barely ruffled, for he knows Leporello isn't so different from Donna Anna and Donna Elvira. They all protest but remain transfixed. The Mattei/Terfel dynamic shows the symbiotic relationship between two strong personalities made uneven because of their social status. The dinner party scene bristles with latent menace.

Everyone's playing mind games in this opera. Zerlina (Anna Prohaska) keeps up an illusion of innocence yet delights in kinky activities (read the text). Zerlina is young, but no puppet. Prohaska's movements are as crisp as her diction, creating a pert, non-victim personality who could quite possibly pull the strings on Don Giovanni if their positions were reversed.  Prohaska is a singer to follow. Book now for her recital at the Wigmore Hall on 4th March.

This production, directed by Robert Carsen, emphasizes the games the characters are playing. When Don Giovanni and Leporello change clothes, they aren't really fooling anyone who doesn't want to be fooled. The set (Michael Levine) resembles the curtain at the Teatro alla Scala, which Don Giovanni "pulls" down in replica. The masqueraders emerge from the audience, dressed in velvet, the colour of blood. It's a very good use of the otherwise wasted space right down the middle of the theatre, and dramatically correct for it engages the audience to take a stand on the morality in the opera.

When the Commendatore rises from his grave, Kwangchul Youn's magnificent bass booms across the auditorium. It's terrifying because the audience is disoriented, just like Don Giovanni. Youn is standing in the royal box, with the President of Italy, Giorgio Napolitano. It's a powerful statement, since the Italian president isn't an ordinary politician. Politicians screw around like Don Giovanni, but the President of Italy, like Il Commendatore, is supposed to represent higher ideals. Mattei and Youn struggle with such intensity that it's irelevant whether Youn "is" or isn't a statue.  He stabs Don Giovanni through ewith his sword. "Questo è il fin di chi fa mal" sing the ensemble at the end. Often this epilogue feels unnatural after the fireworks that went before. This time there's a twist. Mattei stands on stage, while the ensemble descends into a hole in the ground.  In the real world, Commendatores don't appear by magic. Bad guys will win unless we take responsibility against them.

There are clips on Youtube of the broadcast, but boycott them. They're very poor quality and will spoil the experience. So wait for the repeat broadcast (Arte TV soon, I believe) and DVD.
at December 09, 2011

"Netrebko sings the recititative and Mi tradì, quell'alma ingrata with such passion that you wonder what private grief she's trying to suppress."

Really? I didn't know Netrebko sang Elvira… I thought she was Anna. Seems you have your Donne mixed up. ;)

Hilarious! cut and paste error fixed, many thanks!

- just came across this on Youtube, browsing around - watched the first 20 minutes, completely entranced, as a good production will do - hope the DVD is available soon with English subs! - but a comment on your review - I did not, in this performance or others, get the idea this was a semi-rape, but just a lover's spat, she wants and expects more, and I suppose more 'exclusivity' from the Don, he plans to keep his freedom. Been there done that, as they say, as have countless others declining the feminine chains - but just a thought.