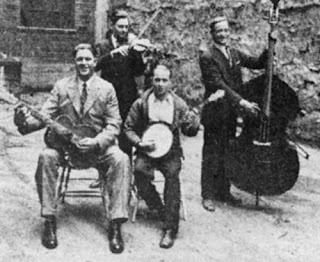 Last night I was at I Fagiolini's 25th anniversary party at Spitalfields Winter Music Festival. A capella close harmony - renaissance and 21st century. The fun thing is the way singers can adapt any music and any style, from Striggio and Monteverdi to tunes by Lennon and McCartney. So maybe Manhattan Transfer and barbershop singing spring from a long tradition? When people get together and sing, they can be creative. What are the origins of hillbilly close harmony? People still clog dance in Appalachia, like their ancestors might have in Ireland or Scotland. Did hillbilly song stem from singing in church? Some of the songs clearly have folk origins. A while back I wrote about Knoxville Girl, whose antecdents go so far back that the idea has morphed into many forms, from Carl Loewe's Edward! Edward! (based on quasi folksy Romantic poetry) to modern punk ballad. Please click on this link for more - great juxtaposition of hillbilly harmony and formal Lieder technique.

Seven Foot Dilly was John Dilleshaw who stood six foot seven. He had a band called the Dill Pickles, whose banjo player was known as "Shorty" for reasons apparent in the photo above. As you can see, they were a string quartet!  The song below is interesting because it's just Seven Foot and AA Gray singing a folk tune. Seven Foot strums guitar, AA strums fiddle. Is it Black music, or European folk (religious) music? Seven Foot learned to play from a black musician. Maybe there was a lot more black/white mixing? Fascinating subject for someone interested in cross culture, cross genre.