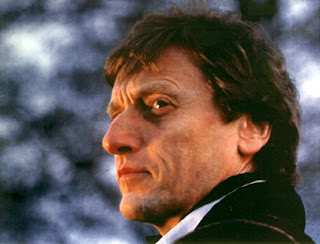 Magical night of a different  kind when Hugh Brunt conducted the London Contemporary Orchestra at the Spitalfields Winter Music Festival. (Read more about it HERE)  Gérard Grisey's Vortex temporum (1996-7) was the centrepiece, for it's one of the classics of contemporary music, brilliantly conceptual, yet rich with imagery and feeling. It's is seminally important and any performance is an event.

Wisely, Hugh Brunt and the London Contemporary Orchestra eased into it with Claude Vivier's Pulau Dewata (1977). Vivier was thoroughly grunge, frequenting rough dives and wearing a sheepskin coat that smelled bad. Then he goes to Bali and immerses himself in a totally different culture. Indonesian music wasn't new to western composers but for Vivier it crystallized ideas. In Pulau Dewata, Vivier uses simple quasi-melodies which pass from player to player, adapting imperceptibly. The music seems to levitate. Imagine a ball parried constantly back and forth until the movement seems to sustain itself.

Gérard Grisey's Vortex temporum is like a perpetual motion installation in sound, infinitely multi-layered. Spiralling patterns, the long planes that stretch plaintively outwards, the piano providing a varied "heartbeat". Incredible incident, suggesting in Grisey's own words, human breathing, sleeping whales, the movements of birds and insects. "In this imagined microscope", he said, "the notes become sound, a chord becomes a spectral complex, and rhythm transforms into a wave of unexpected  duration".  Much is written about spectralism, but its essence is in exploring  the whole spectrum of sound, dissected even beyond normal perception, assembled in music of refreshing freedom. Messaien's legacy, via Stockhausen (Vivier's teacher), expressing the "rhythm of life".

Different concepts of time and consciousness, but other levels of meaning  Each of the three parts is dedicated to a composer and references his own music. The first part honours Gérard Zinsstag, and the second Salvatore Sciarrino about whom there is a lot on this site, like HERE and HERE) and the third Helmut Lachenmann (also lots on this site HERE and HERE). Vibrations, oscillations, percussive dotted rhythms, parallel but contrasting tempi, instruments played in unorthodox ways so you hear sounds from new perspectives. Grisey embeds temporal continuity into this work, like spreading ripples. Ostinato suggests intervals of time being measured, as the music shivers off into infinity. Ironically, Grisey died soon after Vortex temporum was written. His three friends are all still alive. To quote Grisey again, "Vortex temporum is perhaps only a history of the arpeggio in in time and space - from the point of view of our own ears".

The London Contemporary Orchestra are young, so it wouldn't be fair to expect a performance that really does justice to the piece, but they deserve respect. The piano part would tax a Nicholas Hodges or Rolf Hind, so Antoine François did well indeed. At times he made the piano resonate like an organ. Perhaps Grisey was thinking of Et exspecto resurrectionem mortuorum? It's perfectly valid. (read more HERE). But these works are very much chamber pieces, so much credit to to the way these musicians interacted. Congratulations to them for having the guts and committment to tackle this demanding music!

Martin Suckling (b 1981) is one of the rising stars of this generation of composers, and it was good to hear his new de sol y grana. It's based on a poem by Antonio Machado, about bubbles rising into the sunlight. It's written in nine segments, as individual as each bubble. It's closer to a concerto than Grisey's unclassifiable work, and Agata Szymczewska played the violin part vivaciously. This piece reflects Grisey and Vivier in the sense that Suckling develops the idea of perpetual motion and interchange. It's joyful, with nice colours, though could do with more translucence. Suckling is very promising indeed, and definitely worth hearing, but no-one compares to Gérard Grisey. On the other hand, I suspect that Grisey would have been delighted to hear this concert at the Spitalfields Winter Music Festival for it proves the basic premise of Vortex temporum, that creativity is a continuum. Artists die, but their ideas pass on to others.
at December 14, 2011