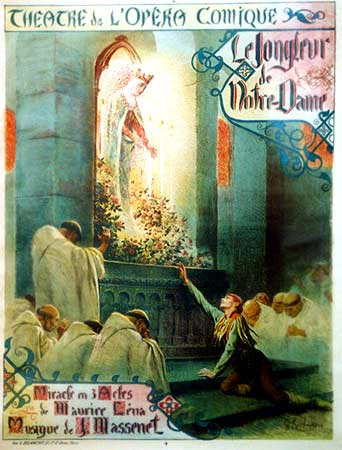 Jules Massenet's Le Jongleur de Notre Dame can be heard online internationally HERE til Thursday. Although it's an opera it's very unusual, almost more miracle-play or oratorio than drama. It was first performed in 1902, yet there are moments when the orchestration is so spartan and pure that you think you're listening to Poulenc or Honegger rather than to Massenet. He also makes references to "medieval" sounds and plainchant, though early music wasn't fashionable at the turn of the last century. Perhaps Massenet's ideas grew from church or folk music (at one stage the monks sing a version of Frère Jacques) but that humility is perfect for the story, which has medieval origins. Wonderful preludes and postludes, some of the vocal parts are "framed" as in medieval art. Each part is drolly characterized, with appropriate instruments. Jean, the juggler,  for example, with bells and violin, Boniface the solid monk, with timpani.

A man called Jean (tenor) tries to make a living juggling for townsfolk at markets and fairs, but they're more into shopping and mocking, so he starves. The monks of the Notre Dame scold him for singing profane songs and make him repent. Since the monks live well on fat meat, (chorus A table!) it's not a bad deal for Jean, These are fancy monks. One sculpts, one paints, one writes poetry, and they scrap as to who's better at serving God. But one wise monk, Boniface (baritone) has dedicated himself to simple things like cooking.  Yet Jean wants to contribute though all he knows is juggling. One night he creeps into the chapel and sings and juggles for the statue of the Virgin Mary. Some of the monks think it's sacrilege. But suddenly a great light emanates from the statue, and the Madonna reaches out to Jean, smiling.  He dies, but he's been blessed.

A perfrormance would run around 75 minutes, no interval needed, so it would be practical to stage with another short opera. Poulenc Dialogues des Carmélites would be a bit too overwhelming. But Puccini Suor Angelica  which it predates by 16 years) might be a perfect match. They're thematically linked, one mostly female voices, the other most male. But just listen ! Le Jongleur de Notre Dame is understated but in its honest, simple piety lies its beauty.
at December 23, 2011

Email ThisBlogThis!Share to TwitterShare to FacebookShare to Pinterest
Labels: Massenet