Aung San Suu Kyi :The Lady and the Peacock 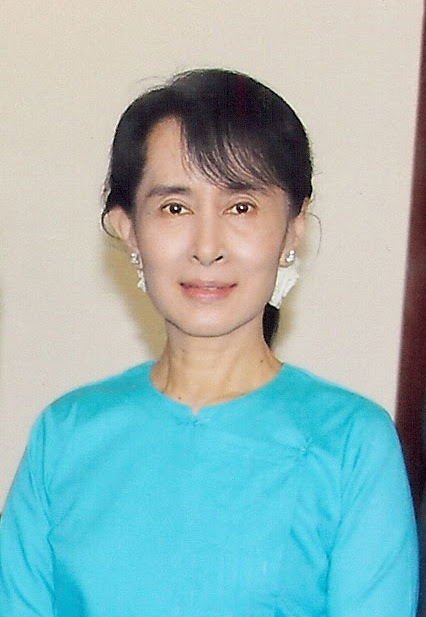 How did a North Oxford housewife, cycling in a longyi to Park Town, win a Nobel Prize and this week be feted by Hillary Clinton?  Do good this Xmas season and read the new book Aung San Suu Kyi : The Lady and the Peacock ( 2011 398pp).

Peter Popham has interviewed Aung San Suu Ki, been to Burma, and has met many people who knew her when she was young. The nbookim includes first-person accounts not available before,  and a good description of events after Suu Kyi returned to Burma. The stand-off at Danubyu in 1989 is vividly described, Suu Kyi was on a progress through rural Burma and forbidden to enter a town under martial law. So she calmly walked down the middle of the road. The military drew their guns but didn't shoot.  That tells us a lot about Suu Kyi but also about Burma. In many countries she'd have been disappeared, not held in long-term detention.


Suu Kuyi's father was Aung San, the father of Burmese Independence, who was assassinated with his cabinet in 1947. Because he was such a figurehead, Suu Kyi had moral force, even after the military downplayed the personality cult.  But Suu Kyi's achievements are her own, and those of the National League for Democracy, and the thousands of unknown, ordinary Burmese who stood up to the regime. Many died, or still languish in prison. It's still not certain what might happen if Suu Kyi wins the next election. The regime nullified the 1990 election win, and used the ludicrous troll trespass incident of 2009 to extend the term of her house arrest.  And government is different to dissent. So no complacency. You need to read this book for background.

Suu Kyi was typical of the educated, idealistic Asian and African elite who studied abroad  and went on to challenge traditional parameters. Think Sun Yat Sen, the Nehrus, even Barack Obama's father. Suu Kyi was international, living from the age of 15 for long periods in India, England, Japan, Bhutan and in New York during the Warhol years. Many of her friends, even her brother, did well at university and had glittering careers but Suu Kyi found her niche only in her 40's.  Yet the fact that she spent her youth raising a family makes her dedication even more admirable. Mandela and Solzhenitsyn didn't sacrifice in the same way. One of the principles of non-violence is that even the humblest individual can change things.

This book is best where the author has access to good sources, like Bertil Lintner's  account of the 1988 revolt and the diary Ma Thanegi kept for Michael Aris. Eventually perhaps, there'll be a more analytical study with more detail on underlying issues. The Burmese regime became "The Albania of South East Asia" for reasons that need to be understood.  Suu Kyi's maternal uncle was a leader of the Burmese Communist Party.  Similarly, more assessment of relations with Thailand and Japan, the only rwo nations in Asia that escaped colonialism.  Suu Kyi's mother's dismay at her marriage reflects fears of cultural dilution in a post-colonial situation. Indeed, the whole idea of colonialism needs to be confronted.  It's by no means an issue of the past. It lives on unconsciously in any west-centric account of non-western subjects.  The many different varieties of Buddhism, for example, don't need unification any more than the many forms of Judeo-Christian belief.

This is primarliy a book by a journalist, well written in an accessible, direct way. That's important because this book needs to reach general readers everywhere. Later, a more scholarly analysis will be possible, but not yet as the drama still unfolds. Yet Suu Kyi's story resonates with most of us. Inspirational reading for Xmas! Gift this book and make a difference yourself in a small way.  Buy it direct from the Burma Campaign UK so profits go towards the cause.  As Lord David Steel says it's "a reminder that we, in the comfortable outside, must not let her down.”