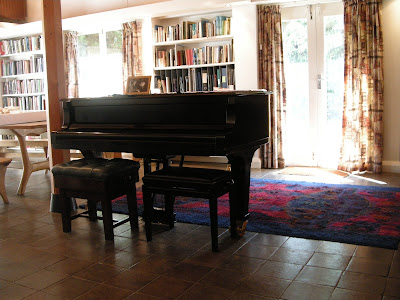 Vintage footage from 1968 : Benjamin Britten and Peter Pears discuss Schubert Winterreise. This certainly isn't a performance that will go down as one of the greats, for Pears's voice is pinched and fragile, but it's worth hearing to see how Britten listens to Pears and interacts with him. Pears doesn't have anything original to say, but that's fair enough, this is very informal.  Winterreise is "like a psychologist's case book" says Pears. Fruhlingstraum, he says. is "the true romantic vison"  "In his dreams", he adds, Schubert sees "adorable things and then he comes back to reality", quietly adding ""well, we all know that, don't we?".

But watch Britten unobtrusively lift the level.  "I am sure that one of the things that so shocked them at the first sing through of the piece was that he could write so beautiful a tune and then interrupt it so horribly with these famous chords". This isn't a recital, and Britten plays far more dominantly than he might in a normal performance in order to make his point. "And the most extraordinary writing of all, is in Im Dorfe" he says. "Yes, those dogs barking in the distance" says Pears. Then Britten grunts a word that sounds like "in chains...." and starts to play with a heavy, dragging pace. Perhaps the dogs are chained, but it's the protagonist who really is shackled with emotional chains.

In the photo above, look at the two piano stools together, just like in the video. The camera might have been near the curtains at right. Behind the piano is another wall of books. This is the library/music room at the Red House, preserved very much as it was when Britten and Pears lived there.