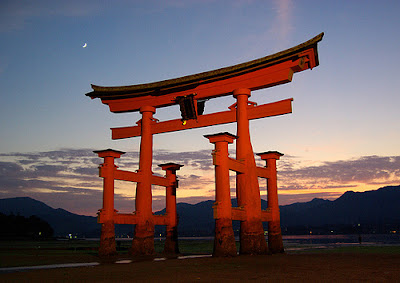 The latest Total Immersion weekend at the Barbican Centre features Music from Japan. Or more specifically, the music of Toruy Takemitsu, Toshio Hosakawa, Jo Kondo, Dai Fujikura and other contemporary composers. This isn't "Japanese" music in a generic sense, but music created by composers who write modern music, enriched by influences from a tradition that's even older than the western.

In the film being shown on Saturday, Takemitsu is shown sitting in a garden, explaining how gardens are a metaphor for music. A garden is like an orchestra, he says, consisting of lots of different elements which a musician can arrange in whatever order seems best. You can increase the impact of some elements by massing them, or extend their colours by planting with others that complement the palette. Sometimes some elements capture the eye, such as autumn leaves, while others remain a backbone, like pines. Textures vary: sometimes the delicacy of spring blossom, sometimes the tough character of tree bark. Then, too, there are extras, maybe the sound of water trickling from a bamboo pipe, or the chirping of crickets, or wind blowing through leaves. Or even the pattern of shade thrown by a cloud in the sky. A gardener works with nature, not against it. Thus a composer works with an orchestra, extending it and encouraging it to grow, but finding his ideas organically and in balance.


Takemitsu's music exemplifies an aesthetic which combines music, philosophy and a general regard for high artistic standards in all aspects of life.

What's more, these composers, though modern, reach huge audiences even though their work is "new". Everyone who's seen films by Kurosawa, Mizugoshi and others has heard Takemitsu, Ifukube or Riuchi Sakamoto, so new music is absorbed naturally into audience consciousness. Indeed, movies are built around music, like Shohei Imamura's Black Rain  which is a tribute to Takemitsu's Requiem for Strings. (more about that piece and the film here)   In the west, people make a fuss about the image of classical music as "elitist". They should look to Asia, if they want insights into the future of classical music.

HERE's a link to the Barbican day. Before that, on Friday 1st there's an all-day conference co-hosted by the Institute of Musical Research and the GSMD. It includes a performance of Takemitsu's Rain Tree Sketch II with pianist Noriko Ogawa. Here's a lovely clip :