In the Shadow of the Opéra - Graham Johnson Wigmore Hall 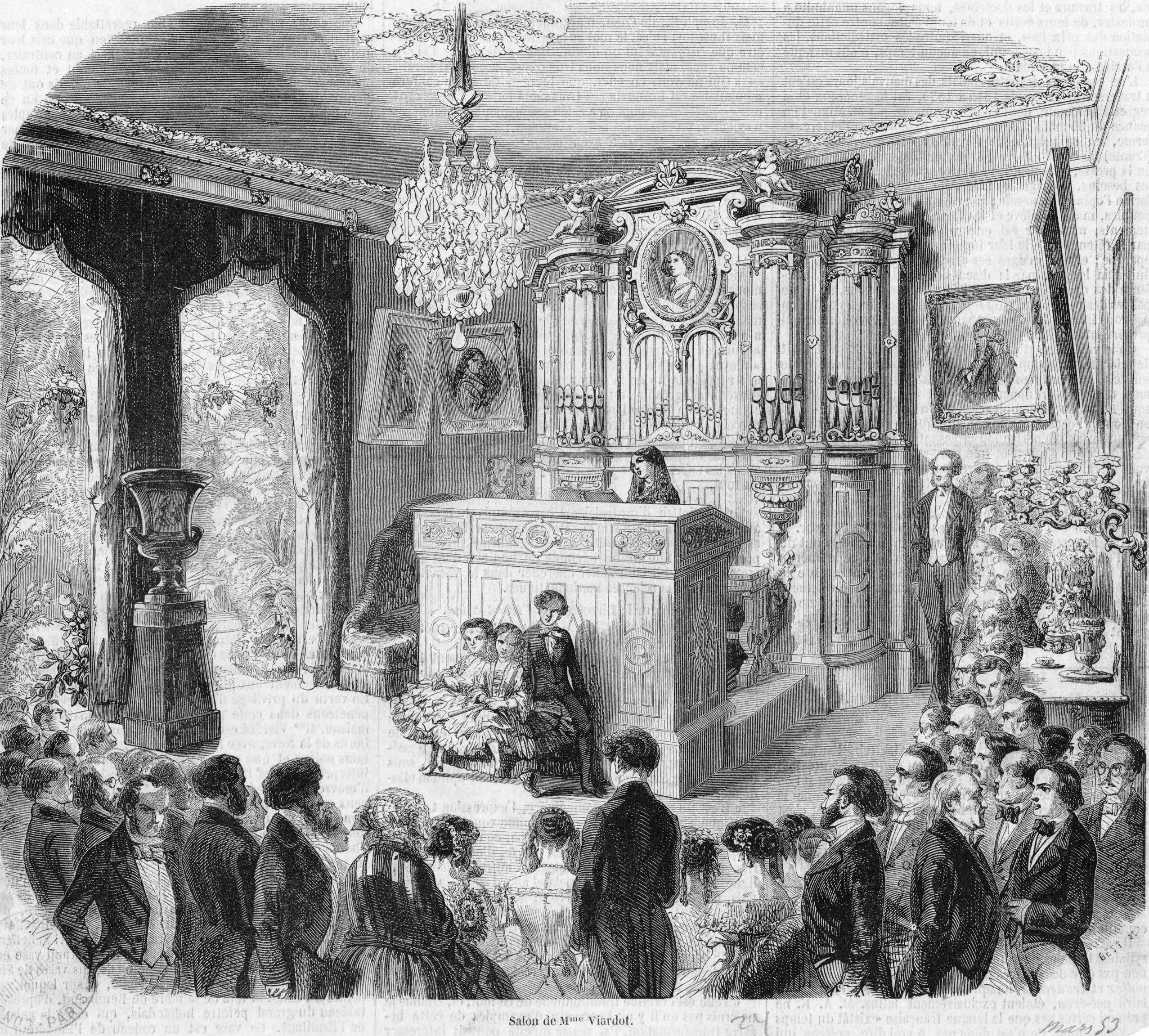 Graham Johnson chose the title "In the Shadow of the Opéra" for his recital at the Wigmore Hall, London, with Lucy Crowe and Christopher Maltman. Given the renaisaance in French opera, it's good that we should be thinking of the nature of French song and its relationship to French opera and culture. The engraving shows the salon of Pauline Viardot (1821-1910), the singer with connections to many of the composers on this programme,

This was an extremely ambitious programme. A friend, who has been going to the Wigmore Hall for 40 years, exclaimed "Some of this material we don't know!" There was so much to take in that it will take time to fully sink in. It would be worth replicating the programme at home, to study it further.

Johnson divided his recital into four main themes : On Wings of Song (Love in flight), Mélodies and arias, Vers le sud (Exoticism) and Seascapes and Landscapes. The first two sections focussed on form, the last two on subject matter.

First, he focussed on lyrical mélodies like Charles Gounod's Tombez mes ailes! The image is of a butterfly in joyful flight, but to protect her offspring, she must tear off her own wings and die. It's a metaphor for the artist who must struggle and sacrifice in order that art might grow.  The gravitas of the final line undercuts the flightiness that's gone before. Christopher Maltman sang the final line "Il faut vieller,  et travailler" with great force.  Just as Maltman's voice is dark, Lucy Crowe's voice is every light and sweet, good for a 19th century heroine. In this section she sang light-hearted uieces like Massenet's Le sais-tu? and Reynaldo Hahn's Si mes vers avaient des ailes. This made Maltman's songs have stronger impact : Georges Bizet's La Coccinelle (to a poem by Victor Hugo) gave Maltman a chance to show his skills as a character actor. The ladybird has such personality she could become a role in music theatre. Songs like Lucien Hillemacher's Villanelle lay too high for him, but the point was made : there's more to singing than getting the notes right.

Théodore Dubois (1837-1924)  was one of the most successful composers of his day, but was despised by the young Gabriel Fauré, one of Pauline Viardot's inner circle. Johnson pertinently laced Dubois's Madrigal with Fauré's Fleur jetée. Dubois' delicate lyricism outclassed by Fauré's pounding rhythms. Ironically, Madrigal is more conventionally a piece for the theatre and Maltman dramatized it well. Dubois's poet, Henry Murger, inspired Puccini's La bohème. Fleur jetée, however, is by far the more distinctive piece in musical terms, which is why it's fairly well known and a favourite of many high sopranos. But it's not really a piece for big houses, and Lucy Crowe's voice was challenged by the loud crescendo in the final line. Johnson followed the song with Fauré's La chanson du pêcheur, which Maltman delivered in an almost conversational style. This you could imagine embedded in a larger work. Debussy's Apparition (Mallarmé), with its watery imagery and sparkling piano  textures, suggested Pelléas et Mélisande, though it was written as early as 1884. It's even less sympathetic to voice, set extremely high in the style of the time. Massenet had the last laugh though, with a splendid duet Horace et Lydie (1886) to a poem byAlbert de Musset. Mélodie or aria? The song describes Horace and Lydie's past romance, the voices deftly cutting across each other. At the end, they resolve their dilemma and sing in harmony.

One of the key themes in French culture is Orientalisme. It was a means of exploring "unknown territory" in many ways. Orientalism garbed ideas in strange, alien  ways, so artists could express unusual thoughts in dramatic context. Strangely, there was no Délibes in this recital but we had Hector Berlioz Zaïde (1845) a florid narravtive song set in Granada and the palace of Aladdin "qui vaut Cordovie et Séville!"  More Gounod, too. Maltman sang Maid of Athens (1872) partly in English because the text is Lord Byron, but the chorus is in Greek, reflecting Byron's passion for Greek independence. Two "exotic" languages in one song. Giacomo Meyerbeer's Mina (1837) is a jolly piece, fine for music theatre. Perhaps I'm the only person to have discovered Meyerbeer through his songs (excellent recording by Thomas Hampson) but at least that made me appreciate how interesting his work can be.

Xavier Leroux (1863-1919)  was a new discovery for me, because Le Nil (1890) is a gorgeous song, intensely atmospheric. Lucy Crowe sang the mysterious introduction quietly, just above a whisper, so we could imagine we were floating along the Nile at night in a small boat. The poet, Armand Renaud, contrasts the bacarolle with the image of the Great Sphinx and the wide plain beyond the river.  Thw lovers and their moment of happiness dwarfed by vast historic forces, A beautiful song I'd like to hear again. Two songs about guitars completed the section - Eduard Lalo's Guitare (1885) and Camille Saint-Saëns Guitarres et mandolines.

Operas on the grand scale can evoke huge panoramas of time and space. But so can song. Bizet's Douce mer (1867 )(Lamartine)  and Fauré's Les Bercaux (1879) (Proudhomme), are charming mood pieces, the former embellished with an exotic cry which suggests that the Mediterranean setting might even be North Africa. Debussy's Nuit d'étoiles was perhaps the best known song in the recital, pleasantly done, if the phrasing and intensity wasn't quite up to the standards of, say, Véronique Gens or others who have made it a trademark.  Massenet's Joie (1868) (Camille Distel) ended the evening on a cheerful note, but Johnson and his singers wisely chose to repeat Saint-Saëns Viens! (1855) (Victor Hugo) as an encore. It's an enjoyable duet where the voices intertwine rather like traditional rounds. So perhaps folk song got its way into this programme after all.