Les misérables - the music not the musical 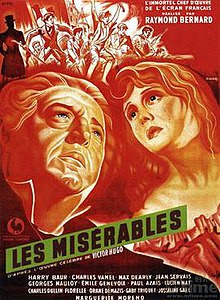 Yet another movie version of Victor Hugo's Les misérables! The saga could have been written for cinema, given its sprawl and extreme drama. Barricades and underground sewers are a bit beyond most normal staging. But it's perfect for film.

There's the 1925 silent Les misérables, which runs for six hours. I've seen only extracts, which is maybe just as well.  Then there is the 1934 sound film, directed and written by Raymond Bernard, which runs only 4 and a half hours. This has been restored and is available on DVD  It's faithful to the original novel,  with direct quotes and strong, pungent characterisations.  And the music was written by Arthur Honegger of whom there is a lot on this site if you search.

Honegger's score for Les misérables is vivid without being over hysterical like some film music. The story was powerful enough to support the action, so the music works as music and sounds good even without the visuals. Audio alone, some movie music cloys to the point of vulgarity. Honegger's Les misérables works as music.  With a basic knowledge of the story, you can fill in the narrative, but Honegger's music unfolds like a symphonic poem in its own right. Plus, it runs less than an hour.
at January 09, 2013