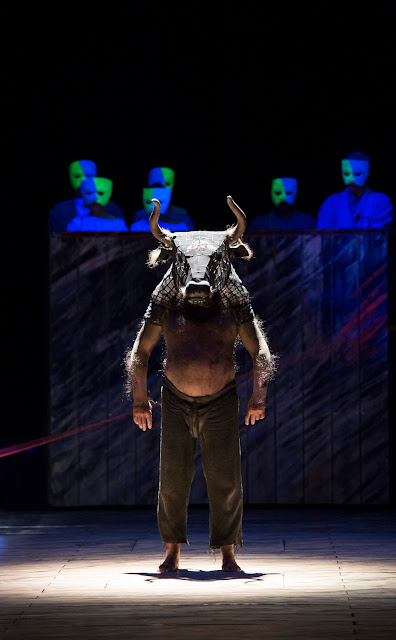 John Tomlinson stole the show - deservedly - in the revival of Harrison Birtwistle's The Minotaur at the Royal Opera House. Thunderous applause and then a surprise. A table was wheeled onto the stage with a giant cake. "We're celebrating Sir John Tomlinson's 35 years at the Royal Opera House" said Antonio Pappano, beaming with joy.  "I wasn't expecting this", said John Tom, visibly moved. We can see curtain calls anytime, but this one we will never forget. The house roared approval.

Harrison Birtwistle wrote the The Minotaur  as a gift to John Tomlinson because it's a role he could be singing well into old age, long after he ceases to sing other parts.  Tomlinson's acting skills are so strong that he can dtraw on inner reserves few others can tap. Any gruffness in the voice becomes a positive asset because it expresses the ravages the Minotaur has experienced. When Tomlinson sounds vulnerable, he's showing how the Minotaur, for all his ferocity, is himself vulnerable. He shows us the man Asterios, behind the mask. Half naked, and with a tail, Tomlinson manages to look both strong and fragile at the same time. He shows just how young the creature really is, younger than Ariadne, closer perhaps to the Innocents whom he is forced to kill.

Although the cadences sway upwards and downwards, like the paradoxes in the plot, the middle register is warm and natural, the lines ending in diminuendo. At the very end, Birtwistle clothes the Minotaur’s dying moments with remarkably subtle counter-tempi. The Minotaur is at last liberated from the prison that is his body, and for a few moments his soul is expressed in music of great purity. This is a role that needs sensitive, thoughtful interpretation, and John Tomlinson has its full measure. "Between most and least, between man and beast, ...next to nothing". As the Minotaur dies, the small boy within the monstrous frame is released. The mighty John Tomlinson becomes a frightened lad with stumpy, childlike legs, singing a broken lullaby. It is almost impossible to imagine another singer bringing to the role  Tomlinson's depth of characterization. We were indeed priviledged to have had another chance to hear him as The Minotaur. I, for one, shall never forget.

Because I've written about The Minotaur and about Harrison Birtwistle so many times over the years, I don't need to write another "review" as such, even though my ideas continue to develop that I could write volumes.  Birtwistle has written another intricate maze. a "place with more dead ends, more flaws and fault-lines than the human heart”. But you could read more HERE and HERE

and HERE (Ruth Elleson's review of the premiere).

Much credit to the Royal Opera House for commissioning and reviving The Minotaur which looks set to become a classic. Good performances from Christine Rice, Johan Reuter, Alan Oke, Andrew Watts, the choruses and Elisabeth Meister, a striking leader of the Keres.