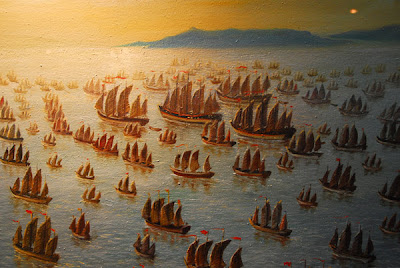 In China, people take classical music seriously, so it's interesting . People listen, children get involved.  So it's always interesting to read about concerts and audiences there. Last year José Serebrier toured China with the Youith Ochestra of the Americas, bringing together young musicians from North and South America with Chinese musicians :  a fruitful exchange that worked both ways.  Read more here.

This year, Serebrier toured China again, this time with the Russian National Orchestra, which he's been conducting for a long time and with whom he's made many recordings. The tour started in Beijing, inside the Great Hall of the People, in Tian An Men Square, built by the Ming Emperors. It was a joint concert between the RNO and the China National Symphony Orchestra. Serebrier and his counterpart Maestro En Shao presented a programme based on the theme of oceans. The Ming Dynasty connection is implicit, for it was during the reign of the Emperor Yongle that Admiral Zheng He sailed through Asia with his magnficent  fleet.

Serebrier and the RNO gave eight more concerts in six cities, "bringing music to such culture-hungry people, spreading the message that music, of all kinds, brings people together beyond cultural or political barriers, helping to create an atmosphere of understanding and paving the way for closer communication between peoples"

In the West, we take music for granted, and often think in mean-spirited terms.  So it's heart warming to read about Serebrier's reaction to the ordinary people who came to his concerts in China. "The most important element for me was to touch the hearts of the public, to move them and give them an artistic experience that would inspire them to come back for more music, to touch their souls. It was fantastic to turn around to accept the public’s applause and to see all those smiling faces. Many of these people were first-time concert goers, so the challenge was especially important for me to inspire them and to leave them with a warm, glowing feeling."  This is what music should be. We should never forget. To lose the magic of music and of listening, that's like losing life. Read more here.
at January 12, 2013