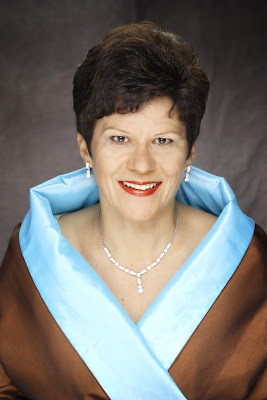 Soile Isokoski and Maria Viitasalo made a welcome return to theWigmore Hall, London. Their recital was a masterclass in what singing really should be about: not simply sound production, but the expression of meaning.

Isokoski has performed  Berlioz Nuits d'été (op 7)  many times. This was not quite as incandescent as I've heard her sing it in the past, but as compensation it was an opportunity to concentrate on listening to her technique.  Her foundations are so solid that you can admire her phrasing and carefully controlled modulation. If the lustre of her top was less than perfect, she made up for that with rich, almost mezzo warmth in the lower ranges. A voice might not be perfect at every time, but a really good singer knows when to use her strengths to communicate. No listener should expect recording-type results every time. Far better, I think, to hear someone like Isokoski manage her resources so wisely.

When Isokoski sang Richard Strauss Drei Lieder der Ophelia op 67 1918, she showed why she's such a good Strauss singer. Her Vier letzte Lieder from 2003, conducted by Marek Janowski, is  outstanding, even in a market full of good performances. Since Ophelia is a character from Hamlet, Strauss's settings lend themselves to dramatization. "Wie erkenn' ich mein Treulieb?" asks Isokoski sweetly, so the horror of the answer cuts sharply. "Er ist tot und lange hin".  When she sings about the naked corpse in Sie trugen ihn auf der Bahre bloss, her voice transforms as if she's witnessing a miracle. "Kein Trauen bringt Gewinn". This connects to the Christian prayer in Karl Simrock's German translation.

Isokoski also makes a speciality of the songs of Charles Ives. Many Americans in Ives's time were recent migrants, so Isokoski's heavily accented English works rather well, creating an image of America as a vibrant melting pot.  In On the Counter (1920) Ives satirizes "the same old sentimental sound" of popular songs by writing rolling circular figures for the piano. Isokoski sings the words "I love you"in such a humourous way that you can hear why Ives couldn't stand trite tunes. Not all divas can let their hair down emotionally but Isokoski hums and whistles with such gusto that she evokes the merry crowd in the opera house in Memories A) Very pleasant . This isn't the Met, full of reverence, but an "opera house" in the old fashioned sense of the word, where people went to have fun and didn't care what anyone else thought.

Aulis Sallinen's Nelja laulua unesta (Four Dream Songs) (1972) are connected to his opera Ratsumies (The Horseman). There are probably more operas written in Finland than anywhere else, and Sallinen is a major composer. Soile Isokoski has made them a speciality, taking them into her repertoire at a very early stage in her career. .Anyone who has heard her sing Sibelius Luonnotar will understand why, for Sallinen's songs are powerful, unleashing supernatural, superhuman forces.

The cycle begins with a chilling piano introduction, suggesting snowfall and driving winds. A Man Made of Sleep appears, but what does he signify? The songs require extreme control of range." Hän ei nuku nukuttamalla", sings Isokoski, leaping suddenly up the scale from low, rumbling incantation.  In Finnish each vowel is pronounced clearly, and there are many vowels in each word, often with umlauts. The language itself shapes this music, and Sallinen repeats phrases to maximize the impact. "Nukkuu unta näkemättä, ei sitä uni herätä" (he is sleeping without dreaming, no dreaming will awake him). The pace cannot be rushed, syllables must resonate.

The third song, On kolme unta susäkkäin (Three dreams each within each) is perhaps the most disturbing and unsettling piece in the group. The piano tolls a staccato sequence, while the voice intones mysteriously. A woman is dreaming and within her womb, an unborn child is dreaming, too.  The mood is desolate, and Isokoski sings as if she's chanting a rune. "Minun täytyy syntyä ja koul" (I must be born and must die). Yet the line rises sharply upward, Isokoski's voice reaching crescendi before the sudden mood change in the last phrase. From thence, it's as if something powerful has been released. The final song is Ei mikään virta, (There is no stream that journeys so swiftly as life itself).  The final song hurtles forward. Words are repeated urgently,turbulently, Isokoski's voice crisp and agile.  "Kulkeva, kulkeva" (moving, moving) was enunciated high and clear despite the choppy pace. A tour de force, greatly appreciated.
at January 28, 2013