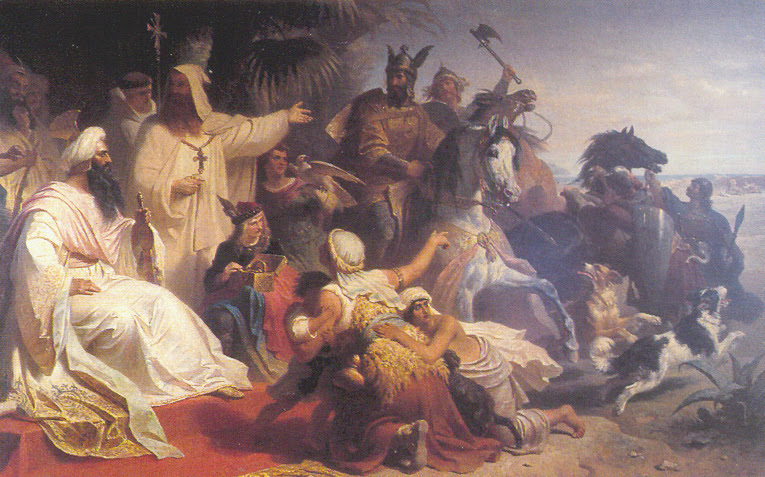 Jonas Kaufmann sings Huon de Bordeaux, Duc de Guienne, who has killed Charlemagne's son and is sent on a mission to kill Haroun el-Rashid, Caliph of Bagdad. He escapes with supernatural help from Oberon, King of the Elves. If that's not enough, Huon is marooned on an island with Reiza, the Caliph's daughter, who's captured by Brigands and sold into slavery. Wild tempests, stirring storms, exotic orientalism and more than a touch of forbidden sex with infidels. Also, magic hunting horns and Oberon, rushing to the rescue astride a swan. The story is based on an English translation of a German text based on a medieval French chanson de geste, Huon de Bordeaux. In the 8th century Charlemagne really did exchange emissaries with the Turks, but the love drama and fairy elements are sheer fantasy. What a heady mix! Carl Maria von Weber's Oberon shows how zany the early Romantic Imagination could be, still coloured by the wild, exotic excesses of the baroque.

Long before Jonas Kaufmann became a megastar, he sang a lot of this kind of repertoire. In the earliest recording I have of his, he's singing in the chorus, unnamed, in Robert Schumann's Der Rose Pilgerfahrt. Also from1998,  Kaufmann sings Hassan in Carl Loewe's Die Drei Wünsche. The part isn't big and he's placed last but if you want to hear Kaufmann in his Stuttgart period, this is the one to go for. Die Drei Wünsche. is a lot of fun and should be better known. It's worth hearing Kaufmann at this stage in his career, because his voice was so bright and pure. He seemed destined for stardom in early Romantic German and Italian repertoire. He succeeded, and more. This recording was made in 2003 and has now been reisuued.

So enjoy Carl Maria von Weber's Oberon in the vigorous recording conducted by John Eliot Gardiner. There are other major recordings notably Keilberth, 1953 available on Opera Today which is not commercially available, and the 1971 version which Kubelik conducts with big-name cast (Prey, Domingo, Nilsson, Auger, Grobe). These have been reissued in different forms, some without dialogue, but for me, spoken dialogue is an essential part of the experience. Maybe modern audiences don't have the patience or empathy for opera other than on their own terms: witness the incomprehension meted out to Meyerbeer's Robert le Diable in the London press. But we need to appreciate repertoire as it might have been for its contemporaries. In this year when we'll be inundated with indifferent Verdi and Wagner, we need more than ever to remember they didn't define the form.

So John Eliot Gardiner's version is a good compromise. Naturally, it's authentic, as the work was originally created in English for Covent Garden in 1826.  A narrator (Roger Allam) speaks the narrative around which the singing hangs. And we get Jonas Kaufmann singing Huon the Hero, exqusitely well. This is Lohengrin in embryo. In the lovely aria "From Boyhood", Kaufmann sings an extremely high note which fades into low strings, before developing an elaboration of the words "For life without honour, I live not to see". Kaufmann sings with a heavy German accent which is a positive accent for the text is so un-English  it would sound daft otherwise. Huon after all is Frankish, consorting with fictional Turks, Arabs and Fairies.

The last thing we need in Oberon is heavy-handed literalism. Because Gardiner conducts the Orchestre Révolutionnaire et Romantique on authentic instruments, the dynamic is fleet, elegant and spirited. Oberon is magical fantasy and needs to fly free to be truly effective. The singing in Kubelik is more accomplished, but refinement isn't really idiomatic. Kaufmann and the cast around him shine because Gardiner's orchestra brings out the period clarity that is in the music. The hunting horn which plays such a role in this opera really sounds like a hunting horn, whether played quietly as if from a distance or loudly sounding alarm.  The "oriental" sequences aren't authentic, but all the more fun becuase they're invention. The storm music is magnificent, played with gusto, the intruments pushed to the limits. Period performance isn't precious. It connects better to the lively spirit of early Romantic music theatre where everyone knew they were experiencing fantasy, not cinematic realism.
at January 22, 2013