Opera in a Bamboo shed

Opera in a bamboo shed? Those who know opera only from a western perspective have no idea what happens in the rest of the world.  Chinese opera long pre-dates western opera, and is far more deeply embedded into popular culture than those in the west can comprehend. So when Hong Kong starts a major initiative into Cantonese opera traditions,  its significance is major, culturally and politically. It's a statement of regional identity.

Over the Lunar New Year, the huge West Kowloon Cultural District hosts Bamboo Theatre, a series of 11 Cantonese operas held in a purpose-built outdoors bamboo shed. When Zaha Hadid's Guangdong Opera House opened, therre was much ill-informed, even racist  negativity from people completely insensitive to cultures other than their own. The West Kowloon Cultural District dwarfs the Guandong initiative many times over.

Tickets to the Bamboo Theatre operas sold out immediately, a sign that the genre is by no means as obscure as the English-language media might suggest.  Cantonese opera continues to be performed throughout the region, and classic opera films are often broadcast on TV. Traditionally, opera was performed in large temporary bamboo venues specially built for the occasion. Opera companies travelled, often by foot, carrying their props with them. Opera came to the people, not the other way around.  Fixed-site theatres became popular at the turn of the last century, starting a new variant of the tradition. One of the 1930's art deco theatres near West Kowlon is being restored.  But temporary theatres meant that operas could be performed anywhere, even on remote islands, bringing villagers into contact with wider regional culture.  Performances often coincided with important religious or clan events.

Once I was hiking and noticed streams of people with flags heading across the fields. They were going to a festival held by 3 villages every 60 years. All the villagers who'd emigrated came back with their children and grandchildren, many raised abroad, coming to connect to their roots. Talking to some emigrés I realized that some worked in the Dutch drugs trade. Haha! But most overseas communities are legit, and triads also have a positive, non-criminal role in traditional Cantonese communities. A BBC film crew was on hand, so the documentary is in the archives.  Magnums of VSOP brandy consumed, thousands of oysters (a local speciality). Outside the matshed theare there were 40-foot high effigies of village gods, to confer prosperity and protection. Arias and plots in Cantonese opera are fairly familiar, so the emphasis is on the skill of the performer, and a strong sense of personal input. None of the affectation or oneupmanship that plagues some western attitudes to opera. 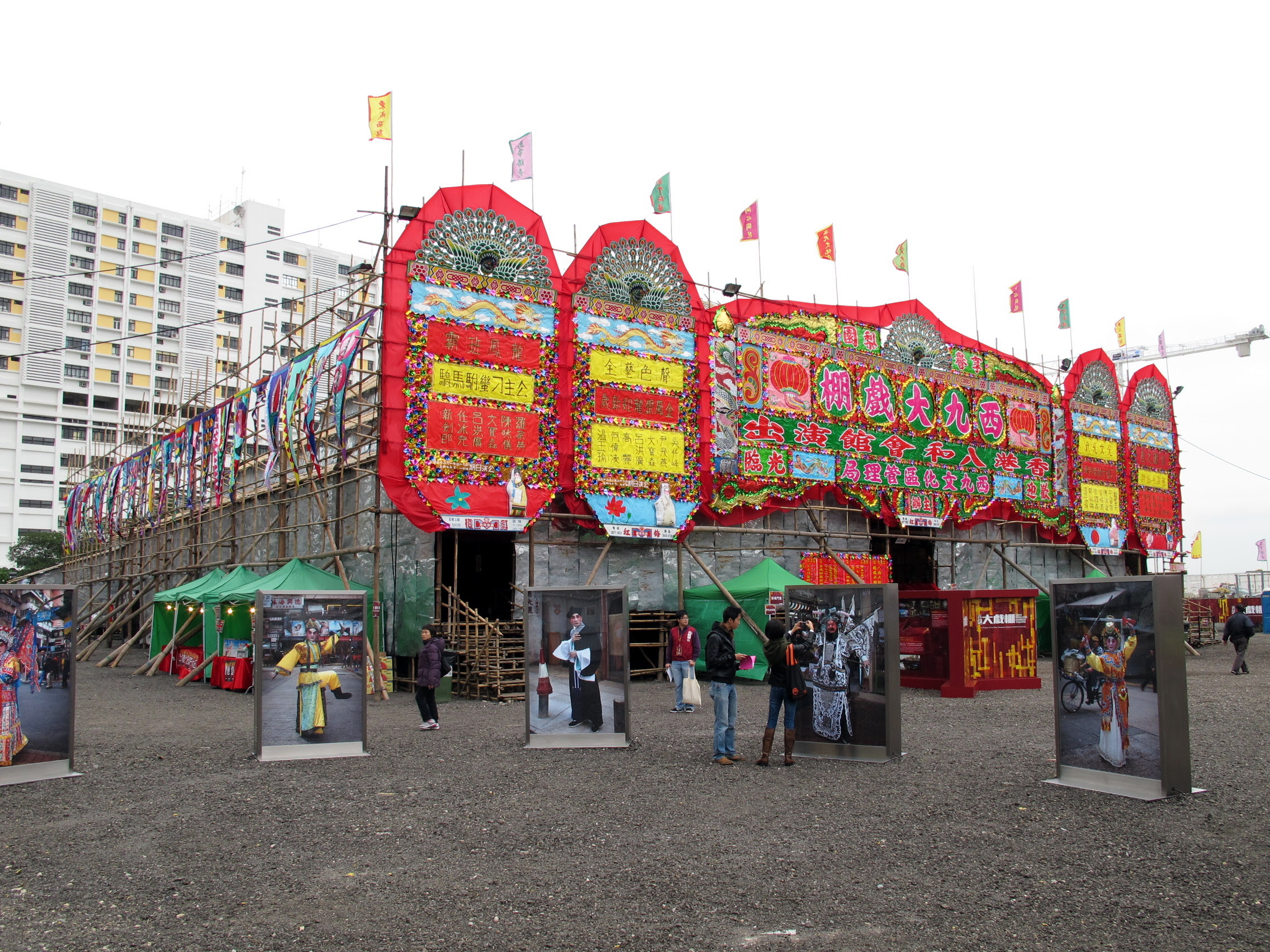 The photo at the right shows how big bamboo theatres can be. Building bamboo scaffolding like this is an art in itself, still practised in Hong Kong with its massive skyscrapers. The big red structures are also made of bamboo, decorated with paper flowers and coloured silks, nowadays lit at night with electric lights. Theses banners appear whenever restaurant and shops open: a traditional art that certainly hasn't disappeared.

Hong Kong University is sponsoring a long-term project into regional opera, with emphasis on three village traditions, though traditional opera certainly isn't just confined to rural areas.  A few years ago a huge bamboo theatre popped up on a vacant lot among the high rises in Sheung Wan, one of the oldest districts on Hong Kong's main island, though it's completely urbanized now. HKU is doing the project because it integrates many different disciplines of study: history, culture, engineering and sociology. The project also connects the community with the university and validates regional identity. Enjoy the video below, with English subtitles: