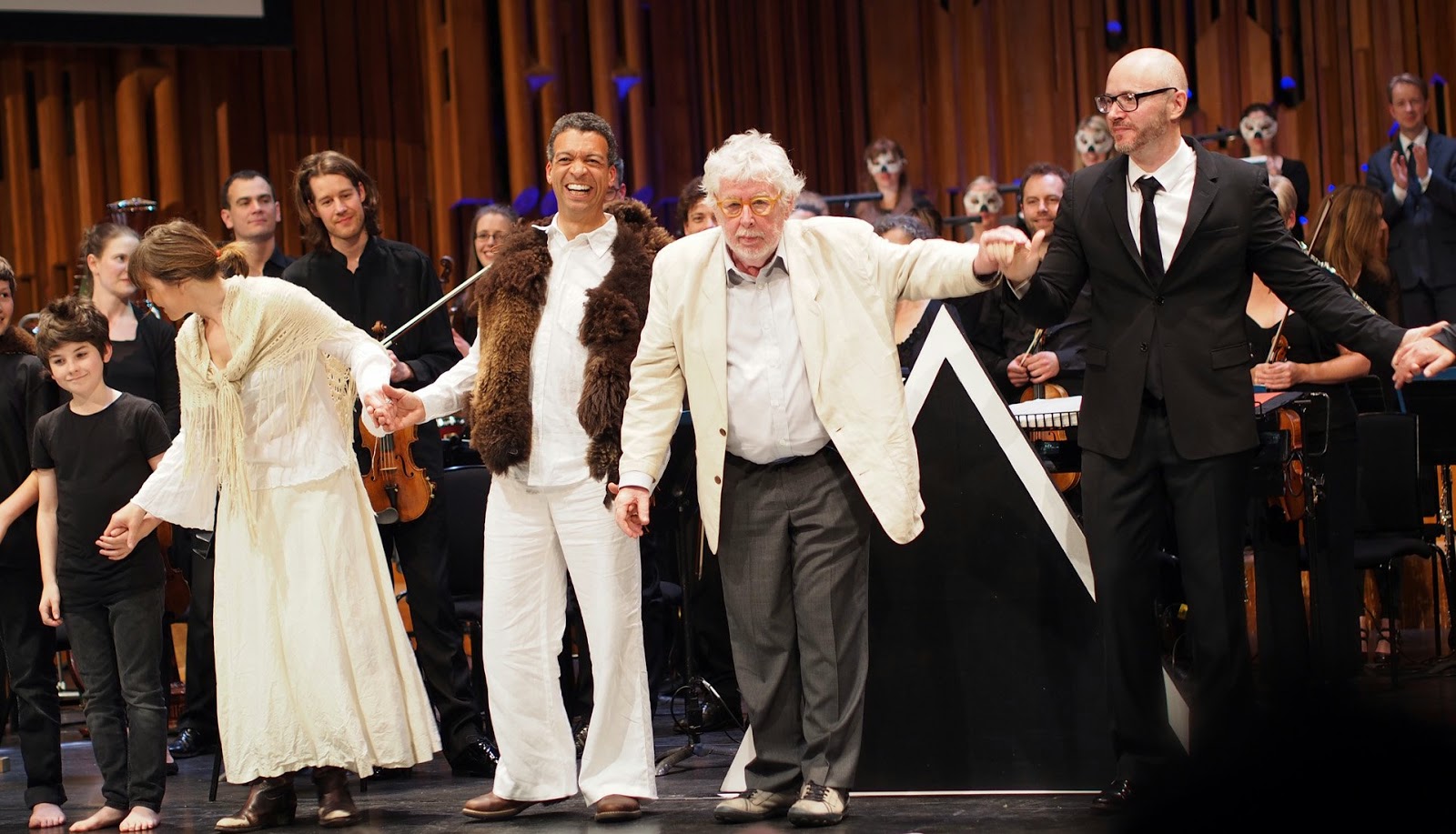 Latest in the Barbican's Birtwistle at 80 celebration, Harrison Birtwistle's Yan Tan Tethera, from 1984. For a change titles like "A Mechanical Pastoral"  add to meaning. The piece is "pastoral", a rumination on folk traditions which date from before Christian times. Whatever period these shepherds may live in, they connect intimately with an ancient landscape. Yet Birtwistle's music is constructed with mathematical precision. Perhaps he's suggesting clocks, as he has done elsewhere, alluding to Time itself, operating on many different levels at once.  Geological layers, layers of language, repetitive layers and interconnections in the score.  Yan Tan Tethera is a maze in music, like the mysteries that might lie beneath the sarsen stones and prehistoric burial mounds.

The narrative is extremely simple. Just as in a medieval mystery play the characters are symbols, not characters in themselves but links to cosmic truths. In theatre history, the idea of psychological character development is very recent indeed.  Alan (Roderick Williams) comes from the northlands, Caleb Raven is a Wiltshire man, who pokes the ground, looking for buried treasure. "I wave to him but he never waves back" sings Williams. Caleb Raven (Omar Ebrahim) doesn't like immigrants. His name itself hints at Cain and Abel, his surname sinister and his abode the mound of Adam. Alan came south against his will, driven by the sound of an invisible piper who is also the Bad 'Un, ie, a Satanic figure (Daniel Norman). Alan starts off with two sheep, who multiply to a large flock: Alan's wife Hannah (Claire Booth) gives birth to twins who mysteriously multiply while Alan is imprisoned under the earth by Caleb Raven, jealous of his good fortune. Mathematical puzzles in the music, too - diabolic triads and triplet, repeated patterns that vary in sequence.  Baldur Brönnimann, a new-music specialist, conducts with unsentimental lucidity. Waffle isn't Birtwistle's thing. (Shame about the poor unsigned programme notes.) The very title "Yan Tan Tethera" refers to archaic methods of counting and measurement. so accuracy is of the essence.The Britten Sinfonia and the Britten Sinfonia Voices responded well to Brönnimann's tight phrasing. "Pastoral" in Birtwistle's case doesn't mean dreamy, but earthy and gritty. John Lloyd Davies' semi-staging. employed the image of sarsens, standing on flat plains. Now they stand immobile, but once they were transported from far away. In a piece like this, "singing" doesn't mean elaborate coloratura, but solid pitch and down to earth diction. Roderick Williams is perhaps the best baritone in English repertoire in this country, and Omar Ebrahim the best for avant garde (though Williams sings a lot of new music). Together the pair were ideal counterparts, two opposing poles, like the landscape they occupy in the score. .More on Birtwistle on this site than most anywhere. please explore.
Photo (top): Roger Thomas
at May 30, 2014

The programme note is signed (along with the synopsis), on p.7 of the programme booklet - Paul Griffiths. He spoke extremely well at the study on Sunday.

For whatever reason I've only got Paul Keane and John Lloyd Davies. Paul Griffiths is brilliant - the best in the business - but this didn't seem like his style