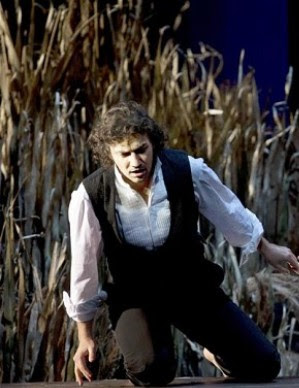 Gala nights at Teatro alla Scala Milan are big occasions. There's often a political dimension becaue Italians take opera seriously. In 2010, there were demonstrations and Daniel Bareboim made a passionate speech from the podium .This year the fact that Wagner was chosen instead of Verdi was an issue, and some politicians didn't attend. This year, the performance wasn't screened live in cinemas outside Italy. Perhaps they wanted to preserve the exclusive cachet.  But seat sales aren't the way the market works anymore. Thwarted of the usual cinemas screenings, audiences outside Italy watched the broadcast via arte.tv.

The cast list was stellar: Jonas Kaufmann as Lohengrin, René Pape, Annette Dasch, Evelyn Herlitzius, Tómas Tómasson. Even the Heerfufer (Herald) was tops :Zeljko Lucic. Since Barenboim has been associated with Wagner most of his adult life, the performance was never in any danger of being a disappointment. Surprisingly, though, some of the singing wasn't quite as good as might have been expected. Tómasson's Telramund suffered vocal roughness, particularly in the first act, though he picked up later. Even Kaufmann wasn't quite his usual, luminous, lyrical self.  But it was plenty good enough, we can't expect extreme perfection all the time.

Annette Dasch pretty much stole the show. She sang Elsa at Bayreuth in the Hans Neuenfels production (more here). She was so good that I for one wasn't heartbroken when Anja Harteros pulled out at the last moment. Dasch doesn't fit the cliché of Elsa as passive victim waiting for a handsome prince : she's too strong a personality, and too vivid. A voice with that luscious richness couldn't sound wan. Besides, Elsa is a Wagner heroine. Like Brünnhilde, Isolde and Senta, she finds solutions. Brabant is in chaos because Elsa's brother Gottfried, the rightful heir, has disappeared. Telramund accuses Elsa. If she's eliminated, Ortrud can rule and restore her ancient gods. This isn't merely a struggle for succession but a struggle between cosmic forces

If Ortrud can use magic, Elsa can call on supernatural forces. The libretto refers to her as in ruhiger Verklärung vor sich hinblickend (quietly transfixed, staring ahead of her, as if unaware of the crowds around her). Elsa may not even know it, but she can call on some deep subconscious force to help her survive. The Grail community isn't real, and indeed, goes against Christian theology. Is Lohengrin a kind of instinctive wish fulfillment?

Claus Guth's staging addresses Lohengrin on a psychological level. This Brabant isn't historic. When the real Heinrich der Vogler lived, Ortrud's gods had long been replaced by Christianity. In Wagner's time, though, Germany existed as a collection of small states. If Guth sets this Brabant firmly in the mid 19th century, he's closer to the deeper spirit of the opera than the kitsch pageantry of Moshinksy, where decor replaces drama. The darkness in Guth's production throws focus on the characters.  Telramund and Elsa are buttoned-up power figures. Gottfried is seen with a "young" version of Elsa, reminding us how strongly Elsa and Gottfried were bonded.

In the libretto, Wagner makes a point of referring to Lohengrin's horn, a detail often overlooked by stagings which emphasize the mein lieber Schwan image.  Guth shows that this detail is no accident. What other Wagner hero carries a horn? Siegfried, who saves Brünnhilde from her prison.  Later, when Kaufmann's Lohengrin contemplates the dilemma Elsa puts him in, he cradles it like a child seeks help from a comfort object. In the First Act, there's a piano on stage as Ortrud and Teltramund accuse Elsa. At the end, when Lohengrin departs, the piano appears again among the reeds by the lake. Is it Elsa's equivalent of a horn? Music has the power to lift us out of dilemmas. Imagination is a positive form of magic, with which Ortrud's repressive spells cannot compete.

Heinrich and Telramund are officers, but the Brabanters are decamisados. Lohengrin doesn't need a shining swan suit: he's a Romantic hero, in an open collar shirt, like a poet. When  Kaufmann first materializes, he's curled in a foetal position, twitching like a bird breaking out of its shell.  Later, as he's about to return to Monsalvat, he's barefoot again, splashing in the water around him.  Elsa remains in her finery, albeit dishevelled. She and Lohengrin inhabit different worlds. Essentially, he's a creature of Nature, and she the type he needs to frame him with a name. Lohengrin teeters on a narrow pier above the lake, torn dangerously between earth and water. Later, when Gottfried reappears, he stands on the pier. Elsa reaches out but falls.

Musically, this La Scala Lohengrin is satisying though not quite as great as it could be. Guth's staging may not please the glam and glitter crowd but it's a whole lot more perceptive.
at December 12, 2012