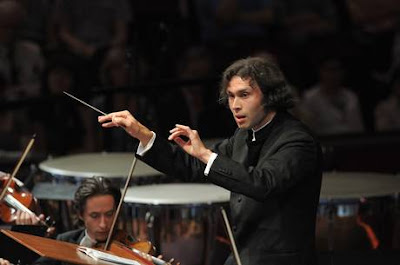 For their second concert on the theme of human suffering, Vladimir and The London Philharmonic Orchestra presented Brahms German Requiem with Bernd Alois Zimmermann Ich wandte mich um und sah an alles Unrecht (Ecclesiastical Action). Unusual partners. But what they share is a deeply felt concern for the human condition.  So much of the Unrecht (injustice) of this world haopens because people deny others the right to exist. The least we can do can do is listen.

Zimmermann's  Ich wandte mich um und sah an alles Unrecht (Ecclesiastical Action) opens with baleful blasts of trumpets and trombones, suggesting the Biblical connection. Part of the text comes from Ecclesiates Ch 4 but the mood is apocalyptic. One can think of Messaien Et exspecto resurrectionem mortuorum (read more here), The brass forms great arcs of sound reaching into space, a reference to the Final Trumpet of the Last Judgement?  Zimmermann uses a large orchestra but colours are used in stark black and white contrast, powerful blasts of sound against tiny barely audible detail. Zimmermann embeds meaning into his musical form. The two speakers  (Omar Ebrahim and Malcolm Sinclair) quote text from Ecclesiates, which the central figure transforms into strange, incantation. What he represents is not of this world.

Zimmermann then employs the tale of the Grand Inquisitor from Dostoyevsky's The Brothers Karamazov. Christ has returned to Earth, and is imprisoned as a madman. The two speakers come at the central figure on all sides, but the Prisoner remains silent. When Jesus was tempted in the desert, Satan proposed that He use his powers to end evil. Why should mankind suffer if God can change things?  "But You would not deprive humanity of its freedom".

The Grand Inquisitor (Speaker 2) cannot comprehend.  "I swear mankind is weaker and more worthless than You could ever have imagined?" UN REST, CON FUSION, MIS FORTUNE this is the lot of mankind, " Sinclair spits out savagely (it's even more effective in German)  "oh for many centuries the chaos of man's free thinking". The emphases are in Zimmermann's score, for he uses the shape of sound to suggest the speaker's dilemma. For a man of temporal power, faith in the flawed "children" of  humanity is plain illogical. Can he understand why The Prisoner kisses him as he is released? The speakers shout staccato, disjointed phrases, which express their confusion.

A long, cataclysmic chord rises, to overwhelming crescendo. Each section of the orchestra explodes - tubular bells are struck, the strings whizzing and whirring, the woodwinds wailing. It'a as if the heavens are being ripped apart, yet Jurowski maintains tight control, focussing the energy into meaning, for there is method behind this supposed madness.  Up to this point, The Prisoner (Or Christ) hasn 't said much, so the metallic dryness in Dietrich Henschel's voice is appropriate. Now, though, the bass part launches into an extremely difficult vocalize, where pitch and rhythm oscillate. Because there are no words, we have to listen for the emotional inflections in the voice. There are two recordings of this piece - Dietrich Fischer-Dieskau and Andreas Schmidt - which show how much the individuality of the performer fills out where words can't suffice. Henschel creates intensity, but relatively little coloration.

As the "normality" they represent collapses, their words gradually disintegrates, though phrases can be heard, "Man does not live by bread alone". They lapse into formal, mechanical gestures. Even the conductor has to stand down from the podium in symbolic renunciation. This isn't gesture for its own sake, but integral to the meaning of the piece. Jurowski has no problem assuming the lotus position with hands across his face. I''ve been told that he's a practising Buddhist, so maybe he knows why his face is covered, prayer-like, at this point. Muffled voices are heard, coming from members of the orchestra, indicating perhaps that Christ's message is understood by some of the common folk, at least.

In the baritone's second solo, words like "Weh!" and "Allein"  and "Wer" are uttered in multiple variations. You need to listen carefully to piece the phrase together but that is the whole point : if we think, then we deserve the freedom Christ believed in.  (For ease of reference, it's "Woe to him that is alone when he falleth").  Then suddenly Jurowski leaps up and conducts the short but intense finale, a quotation from the Bach chorale Es ist genug. Trumpets and trombones blare but this feels different to the fanfare at the beginning. What does Zimmermann mean?  Hope or abandoned hope? Six days later, he committed suicide.

Johannes Brahms. German Requiem also takes its cue from the Bible, but not from conventional Christian piety. The choral part is glorious, but some of the impact was muted by less than perfect diction. The London Philharmonic Choir are reliable, and were pleasant enough, but on this occasion the honours went to the London Philharmonic Orchestra.  Jurowski's pace was contemplative and serene - a necessity, I think, after Zimmermann. This time we could hear the German Requiem as a resolution to the anguish that went before, though Brahms is too strong-minded to be soothing..

Jurowski emphasized details lovingly. In  Denn alles Flesich es ist wie Gras. the winds were particularly lush and verdant, which made Henschel's singing seem dry in comparison, though that worked well in Herr, lehre doch mich, but less so Denn wir haben keinen bliebende Statt, where his voice didn't glow in the critical word "Geheimnis". Still, it had been a long evening for him. Miah Persson sang Ich habe nun Traurigkeit sweetly, like an angel.