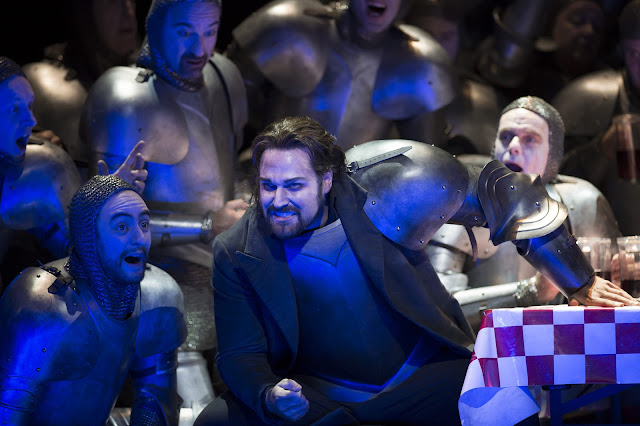 Why was Giacomo Meyerbeer's Robert le Diable an overwhelming success in its time ? The Royal Opera House production suggests why: it's a cracking good show! Extreme singing, testing the limits of vocal endurance,  and extreme drama. Robert le Diable is Faust, after all, not history, and here its spirit is captured by audacious but well-informed staging. Listen with an open mind and heart and imagine how audiences in Meyerbeer's time might have imagined the madness and magic that is Robert le diable.

Bryan Hymel is outstanding, singing the difficult, unusual part with exceptionally fluid, lyrical singing, the cruel tessitura negotiated with such strong technique that we hear the part, not the effort. He isn't simply displaying vocal skill, but infusing the part with greater psychological depth than  the text itself suggests. That is true artistry. Opera is not singing alone, it is drama with music at its heart.  The extremes Meyerbeer writes into the vocal line express Robert's tortured soul: Hymel makes them ring with emotional conviction. In the duet "Mon coeur s'élance et palpite",  he almost steals the show though Isabelle has the killer high notes. Many other exquisite moments, like the Act Four "du magique rameau". Hymel, still only 33, is a voice to cherish.

The parts of Alice and Isabella are tours de force. Alice is a maid from Normandy, as the orchestra tells us with  vaguely folk melodies. Although she carries a letter from Robert's mother she is not Micaëla whose love for Don José is tainted with possessiveness.  Meyerbeer's audiences would have no trouble identifying Alice with Joan of Arc, another girl from Normandy who fought against all odds.  Marina Poplavskaya's Alice is no bimbette, but a heroine worthy of Jeanne d'Arc herself. 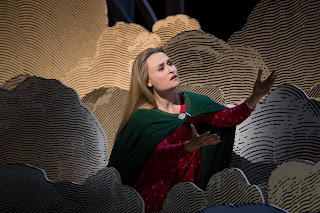 Poplavskaya's voice soars clear over the orchestra in the tricky early parts of the opera. But it's in her confrontation with Bertram that she shows the intelligence she brings to the characterization.  Poplavskaya reaches the horrendously high notes with clarity. Alice is direct, she doesn't make a fuss, so this intense portrayal is psychologically true. Yet it also refects the recurrent staccato in the music, and the thrusting, stabbing passages in the orchestra. The mock medieval battle in the text is outclassed  by the cosmic battle for Robert's soul. Poplavskaya's Alice is lithe and energetic, for she's a swordsman duelling against death. 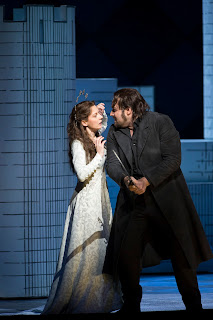 Isabella's two biggest arias, "Idole de ma vie" and "Robert, toi que je t'aime" define the word "show stopper". Done well, the audience is stunned and the action stops until applause subsides. That alone can make good theatre.  In  the Cavatina, the word "Grâce" is repeated in elaborate variations. Then the orchestra chimes in, provoking even greater feats of vocal gymnastics.  You're left gasping. Patrizia Ciofi received much applause for standing in at the last moment. She's very experienced, having first taken the role more than ten years ago.  Perhaps she'll  slip back into gear as the run continues.  She's excellent, but this is a role that needs heart shatteringly astonishing singing.

John Relyea sings Bertram's set piece arias at the end of Act Four impressively but he is no pantomime villain.  Tellingly, he sings details like the recurrent "mon fils, mon fils" with gruff tenderness. He wants Robert because Robert is his son.  Relyea's subtlety suggests why Bertram was once loved by the saintly Rosalie, Robert's mother. While Meyerbeer milked the plot for melodrama, there's room in the music for the depth Relyea brings to it.

Since many people know nothing of Meyerbeer other than Wagner's slander, our modern approach to Meyerbeer is distorted.  Wagner was such a complex person that it's nonsense to take a simplistic view of the Wagner/Meyerbeer relationship.  Alberich-like, Wagner had to attack Meyerbeer to  hide how much he owed him.  It's a classic troll tactic. No wonder Wagner understood the Niebelung mind. If Meyerbeer's use of the orchestra seems over the top to us, it's because we are thinking in Wagnerian terms. Meyerbeer extends his characterizations with motives that run through the opera like a thread - drinking songs, marches, Norman folk songs. Develop these further and call them Leitmotivs.  He also uses the orchestra sparingly - harps around Isabella's angelic singing, brooding winds and brass around Bertram.  The large orchestral flourishes are deftly done, and move the action forward, without overpowering - you want to hear those clear high notes shine.

If we free ourselves of Wagner snobbery, we can appreciate Robert le Diable's true place in music history. Its obvious antecedent is Carl Maria von Weber's Der Freischütz and its direct descendant Berlioz The Damnation of Faust.  All derive form the High Romantic fascination with Gothic fantasy and the occult.  Meyerbeer may not be "modern" taste but that reflects on our awareness of period opera. Even Bach was largely forgotten until Mendelssohn championed his music.  Perhaps the shadow of Wagner is so strong that we don't let ourselves enjoy Meyerbeer because we're too worried about what others might think. 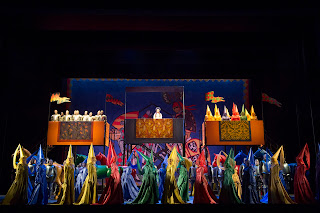 We should bear this background in mind when assessing this Royal Opera House production, directed by Laurent Pelly with designs by Chantal Thomas. This would go a long way towards a reasessment of Meyerbeer because it is very well researched and erudite. The ballet, where the ghosts of dead nuns are seem rising from their graves, is based almost exactly on the original Paris designs. The etchings we see are also based on authentic period imagery.  The huge revolving mountain that dominates the stage could come straight out of a Gothic painting or novel. To 19th century people, wild landscapes represented fear and superhuman forces. Think the Wolf's Glen in Der Freischütz. 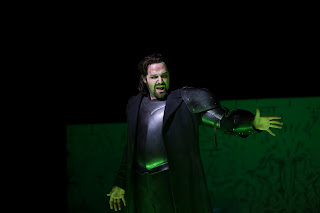 Robert le Diable is melodrama, by no means po-faced. This staging is colourful because the music is colourful.  How Meyerbeer's audiences must have thrilled to the sight of semi-naked nuns dancing lustfully. They would have enjoyed mock medieval pgeantry without worrying too much whether it was authentic.  Our modern obssession with period-specific staging meant nothing to audiences who were used to seeing zany mixtures of period and style. Ironically, this is a much more authentic staging than many realise. In many ways, we are less open to the art of imagination now than our forebears were once. Why shouldn't we have as much fun as they did?  Pelly and Thomas are giving us a chance to see the opera in period context. We should value the chance to see this opera done in this way because chances are we won't get many opportunities since it's not at all an easy work to stage.
This ROH production is being recorded and filmed. BBC Radio 3 is broadcasting an audio version on Saturday 15th December (link here).

Thank you for this enlightening piece - the best by a country mile I have read about ROH's 'Robert'. Most critics seem to lack the cultural nous to appreciate its merits. I was at yesterday's performance and you are right on every count.

Thank you so much ! It's the snobber that stops people from enjoying themselves. Besides the more we know about the genre, the sharper our appreciation.