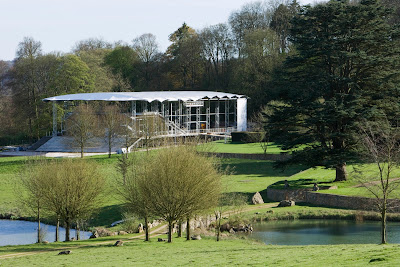 Cheery news on a dark December day! Garsington Opera's 2013 summer season is now officially announced.  Last year the weather was unnaturally cold and wet - blankets and wellies  - but let's hope that next year we'll have proper summer weather, and long, bright evenings to enjoy the park at Wormsley as well as the opera offerings.

The new season starts on 7th June with Mozart's Die Entführung aus dem Serail. The cast includes Norman Reinhardt, Rebecca Nelsen, Mark Wilde, Susanna Andersson and Matthew Rose. Conductor is William Lacey and director Daniel Slater. who directed Britten A Midsummer Night's Dream, the glorious finale to Garsington Oera's years at the home of Leonard Ingram, before the company moved to Mark Getty's home at Wormsley.  Read more about that here. If this Entführung is nearly as good, we're in for a treat.

Garsington Opera scores a coup with the first British staging of Rossini's Maometto Secondo (Maometto Segundo). Garsington has always been famous for reviving lesser known baroque work, and Maometto Secondo is a jewel.  Mehmet II, Sultan of the Ottomans, conquered Constantinople, ending the Byzantine Empire. Next ambitious plan: to conquer Rome, thereby linking Europe and Asia under Islam. Mega geopolitics. Venice was the front line because Venetians traded throughout the Eastern Mediterranean. For Venetians, Turks posed a genuine threat to survival. This Turk was no buffo.  Rossini with political depth? Surprisingly, yes, for he treats his characters as individuals rather than cardboard stereotypes. Maometto is a villain who has beseiged a Venetian outpost, but he's in love with the commander's daughter Anna. The plot's convoluted but the Venetians escape (it's an Italian opera, of course). For 19th century audiences the idea of a lustful exotic foreigner must have created a frsson. (read more about the opera here) David Parry is conducting, so frisson will be guaranteed. Singers include Darren Jeffery, Paul Nilon, Siân Davies, Christopher Diffey, Richard Dowling and Caitlin Hulcup.  Maometto II was a hit at the Santa Fe Opera festival in 2012 so it's going to be fun !


Olivia Fuchs's Britten A Midsummers Night's Deam at the Linbury Theatre, ROH was one of the finest productions I've seen. (more here). She's a Garsington Opera regular, too, and has directed opera throughout the UK and Europe.  So when she directs Humperdinck's Hansel und Gretel at Garsington Opera in late June/early July, we should be in for something interesting.  This is the cast :
Claudia Huckle, William Dazeley, Anna Devin, Yvonne Howard, Sophie Junker, Ruth Jenkins, Susan Bickley.and Sophie Junker  Martin André conducts.

Email ThisBlogThis!Share to TwitterShare to FacebookShare to Pinterest
Labels: Garsington Opera at Wormsley