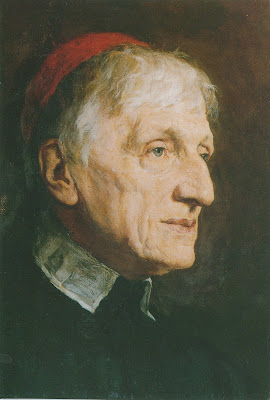 Elgar's Dream of Gerontius was based on the poem  by John Henry Cardinal Newman who's being beatified this weekend by the Pope. Lots of negative flak about Catholicism these days but Newman is a reminder that goodness can exist in a compromised world.

PLEASE SEE my meditation on Newman, Elgar and the Dream of Gerontius HERE.

Newman was a priest at the University Church in Oxford, the heart of the Establishment, massive status. Yet he gave it up to serve in a working class  parish in Oxford.  His talents were soon used elsewhere, but it was a radical step. Catholics were outsiders, then, the faith only recently having had severe legal restrictions removed from it. Victorians equated Religion with Society, the Queen Head of the Church. Conversion was almost treason.

Newman was a rational, self effacing guy so flashy miracles like raising the dead weren't his style.  He had courage and integrity, searching his conscience for what he could believe in. That kind of genuine humility is something anyone can respect, religious or not.

Newman had a gentleman friend with whom he wanted to be buried so they'd see each other at the Final Judgement when the dead are supposed to be raised intact. When the Church wanted to exhume him there was controversy. But when they opened the tomb it was empty. Nothing to move, nothing to bury. End of dilemma. A kind of gentle miracle in its own way, saving face for everyone.

From the Elgar Birthplace Museum in Worcester :

"To coincide with the 2010 Papal Visit and the beatification of John Henry Cardinal Newman the Museum is holding a special exhibition on the Dream of Gerontius from 11th September to 23rd December 2010 (inclusive). The exhibition will include original manuscripts, letters and period photographs revealing all about the composition of this great work and its performance. On display will be Alice Elgar’s personal copy of the poem complete with the 'Gordon Markings', her copies of the markings of particular sections of the poem made by General Gordon of Khartoum in his own copy of the poem "
PLEASE NOTE  I've written a lot on Elgar, Catholicism and 3 Choirs, so please explore this site.
at September 14, 2010