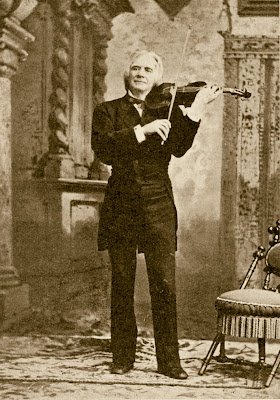 The name Ole Bull's familiar to all, but how many have heard his music? Norway's greatest fiddler, a charismatic personality, who was to Norway what Sibelius was to Finland, only a lot more flamboyant.

Last week he was featured Composer of the Week on BBC Radio 3. Four broadcasts still available on demand. Most BBC Composer of the Weeks are boring, repeated many times, but this Ole Bull series is brand new, unusually well researched and informative. Plus, none of this music is familiar, so grab the opportunity to hear something very different indeed.

Bull's career and music – he was born in 1810 and died in 1880 – are set in the context of Norwegian culture at the time, when the country was still ruled by Denmark and later was in a political union with Sweden, and national identity was still evolving. Music, literature, poetry, even a new language Nynorsk. Listen specially to programmes 3 and 4. What sounds like Edvard Grieg sonetimes is, sometimes isn't - it's Bull! And the pianist/composer Agathe Backer Grøndahl is included - she who raised a huge familiy on her own and wrote music nights.
at September 21, 2010