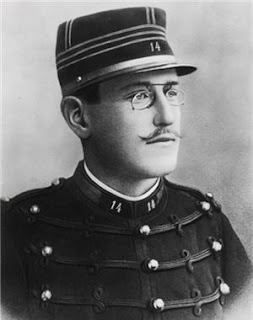 On a  cylinder recording made on 27th March 1912, Alfred Dreyfus speaks about his case. In 1894, he'd been accused of spying, and driven out out of the French army even though the accusation was fabricated. Because his case became a celebrated cause, he was finally exonerated, after having served time in prison. Usually political cover-ups go the other way and evil folk are acquitted because it's expedient. But hooray for Dreyfus, who proved that sometimes the good guys win.

Listen to him, in his own voice, HERE Click on the little bar above the picture. Thanks to the friend who sent it! (Contributions always welcome)  It is quite amazing, even to this day that sounds from another era can be captured.

It's also a reminder that recordings are snapshots, fragments of reality, not the whole reality itself. Because most people born after 1930 grew up with recordings, it's easy to forget that recordings are artefacts, just as in a museum where objects are displayed to tell us about cultures past and alien. We can learn lots from looking at Egyptian relics, but we don't really know what it must have been like to be an ancient Egyptian. That  comes from sorting out the data available and taking intuitive guesses based on empathy.  Yet as close as we might get, it's not the same thing.

Historians don't write history. What they do is assess what fragments remain of the past and draw assumptions based thereon. If new data surface, deductions can be completely revised. What we think we know is in fact provisonal.  A good historian goes to the sources, and keeps an open mind. Same too with a good musician.

Please see my earlier posts on historic recordings - Mahler playing Mahler Piano, Debussy and Rachmaninoff playing 100 years ago and many others.
at September 01, 2010