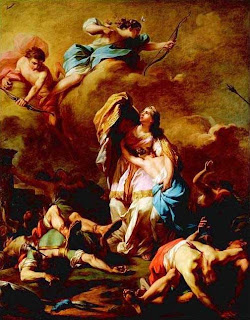 Agostino Steffani's Niobe regina di Tebe is a smash hit at the Royal Opera House. Wild card, for sure. Bijoux like Niobe would normally appear in tiny specialist houses catering to the cognoscenti. Picking this for ROH took guts because such obscurities are almost guaranteed not to reach the mass market. For a change good artistic judgment has paid off. Niobe is the hit of the season, bringing in audiences who might not otherwise do obscure baroque. Lots of last minute extra bookings being made.  This was the opera I'd really been keen to get to, and managed to reschedule so I can.

HERE is the review by Sue Loder in Opera Today. Read it - this is extremely well written, a model of well-informed, judicious thought. If only more writing was as good as this! So read and enjoy. Lots of photos too, well chosen editorially. My own summary on why the opera works so well is HERE

"The quality of the vocal writing matches the inventiveness of the music which seems to hover, musicologically, somewhere between Cavalli and early Handel. The recitatives are lyrical, the arias and duets constantly change form and texture with no one vocal style predominating. There is no aria longer than five minutes and the da capo form in its full Handelian sense is missing: this helps to drive the action forward and several set-piece arias are interrupted by another character. The orchestration is equally complex and thoroughly fascinating in its detail and richness; often a character will be assigned his or her “own” obbligato instrument - such as the nurse Nerea who sings several slightly cynical or world-weary arias with some virtuosic recorder playing echoing her complaints. Anfione is often accompanied by the smaller strings and viola da gamba. Under the confident and stylish direction of Hengelbrock, his expanded orchestra gives an object lesson in how to transfer what was an intimate festival performance in 2008 into a major house display in 2010."
at September 28, 2010

Didn't anyone get the joke ? Freudian slip I wrote Guiseppe di Stefano by mistake, but laughed so much at the howler I left it in. But no-one noticed.