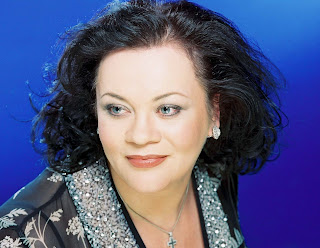 The whole Royal Festival Hall standing in ovation for Wagner's Tristan und Isolde. Even the ushers were impressed. Violeta Urmana stunned the capacity audience with a glorious, passionate Isolde. But that wasn't all. Orchestrally, too, this was an outstanding experience. The Philharmonia Orchestra under Esa-Pekka Salonen was exceptionally lucid.

Usually Wagner Tristan und Isolde is played by opera house orchestras, so the music is naturally eclipsed by what's happening on stage. Fine as opera house orchestras are, they play second fiddle. The Philharmonia though does a much wider repertoire, and is constantly challenged to excel. Under Esa-Pekka Salonen they're exploring new territory : this Tristan und Isolde was exciting as pure music.

That first chord alone, stretched and ending with a sudden zip, expressed insight. Tristan and Isolde each have a past, but their lives culminate in a brief blaze of passion quickly snuffed out. Wagner's music references the ocean, constantly surging, swelling and pulling back.  Ocean as metaphor for emotional depth. Salonen led the Philharmonia through the constant flux magnificently. Clearly defined leitmotivs, precise details, never losing sight of the ultimate destination. Exquisite phrasing, absolute lucidity.

The overture to the final act was a kind of apotheosis, orchestrally, exquisitely judged and balanced, emotionally as vivid as the text to follow. There are many ambiguities in Tristan und Isolde, but when an orchestra plays it "as music", the inner logic becomes so powerful that you're hypnotized. The Philharmonia was incandescent. Truly this was a performance that will be remembered as one of the highlights in the Philharmonia's illustrious history.

Few can create the part the way Violeta Urmana does.  Hers is a voice with genuine richness and lustrous resonance. Her technique is superb - perfect phrasing and breath control, nothing forced or played for effect, none of the silly tricks of vibrato and volume some popular singers resort to for effect.  Isolde is much more sophisticated than Brünnhilde though they're both heroines the world cannot contain.  Urmana's Isolde is magnificent, a princess with a huge history behind her, connected,to ancient arts of magic and healing. Which is why Tristan, whose wounds are psychic as well as physical, needs her. Whoever dressed Urmana knew what they were doing. A creamy bodice on a dark dress with sleeves emphasized Urmana's womanly amplitude. She looked like an elegant version of the primeval goddess Astarte. Sexier than Stemme, and an accurate insight.

Gary Lehman is a Heldentenor who is a Held - a hero with dignity and honour. Tristan's not at all a conventional Action Man, as Wagner's text keeps telling us. He's carried his fate since birth. Calling a child "Tristan" is a form of child abuse, dooming a kid to a life of sorrow. No wonder he's death obsessed, a suicide waiting to happen. Lehman sings with conviction (even when he's lying down). He's moving. In the Third Act, when Tristan speaks of his past, revealing his vulnerability, Lehman's voice softens tenderly: extremely moving. The film projection towers over him, showing a small boy staring at a candle which might suddenly die. Incredible unity of voice, visuals and emotion, totally true to Wagner's text and music. Lehman and Urmana have recorded Parsifal with Gergiev. For them, I'm getting that.

Anne Sofie von Otter was an excellent Brangäne. The character is strong, and von Otter creates the part with forceful but elegant purity of tone.  Von Otter and Urmana are wonderful together. Each very distinctive and assertive, opposite sides of a similar persona.  A dream team - hopefully they'll work together more often.

Jukka Rasilainen as Kurnewal is luxury casting, too. He's very experienced indeed, and it shows. Kurnewal, like Brangäne, is by no means a small part, but an important counterfoil to Tristan. Although there's less to sing, more depends on the quality of the performance. Rasiliainen expresses himself well: this Kurnewal makes an impact as a fully realized personality.

Matthew Best (King Marke), Stephen Gadd (Melot), Joshua Ellicott (Helmsman) were good but outclassed by Urmana, Lehma, von Otter and Rasiainen. With principals as good as these, it's hard for anyone to compete.

Someone told me that a man near her raged out at the first interval because he didn't approve of the film projections. Which says more about him than the projections. Surely anyone seriously interested in opera would have noticed the quality of the singing and playing? This short-sighted bigotry proves how little he really knows or cares. Opera is meant to be visual and like any other element in a performance there will be good and bad.  There have been infinitely more stupid projections than these, as anyone who saw Wozzeck at the South Bank last year will remember.

Bill Viola's projections would operate well as a separate stand alone work of art, a Tristan und Isolde installation, for example. But in performance, they should relate to what's happening. The worst part was in the First Act, where two models who don't resemble the singers take their clothes off in slow, ritualistic motion. I can see the point, though it's very deep, too complex to take in while so much else is going on. But it's horribly distracting because it doesn't connect to the performance itself. The music (especially this time) surges, the film operates in a different time frame. If this sequence was completely cut out, a lot of the problems would be removed.

When Viola's film uses semi-abstract images that complement the performance, the projections work very well indeed. They are intelligent - images of night and day, light and dark, water and fire occur throughout the opera,, and the film follows text faithfully. For example, Brangäne's torch, haunting the love duet, adding to the tension. When Tristan asks Isolde to follow him, there's a shot of a wild path, trees beaten out of shape by harsh winds. A reference to coastal conditions but also to hardship.

The projections in the Third Act are by far the best, for they express deeper ideas in the opera. The ocean, distant lights hidden by mist, the rocky shore, which seems barren until you see the spring that brings forth clear, pure refreshment, feeding mosses and lichen. Because we are seeing Tristan's homeland we're drawn closer into his soul. This is when Tristan reveals himself emotionally, and we get a glimpse of how he came to be who he is. When the image of the ocean is lit by colours of fire and dawn, it expresses the union of opposites which runs throughout the opera.

When Urmana sings the Liebestod the image behind her comes alive, white lights rising upwards as the music does, until the image, like Isolde herself is transfigured ino another plane of existence. It's beautiful and enhances the music appropriately. How it could be done in actual performance, I don't know.

The fact is that semi-staging is a newish art form, still evolving. If the economy continues into nosedive, we may well be hearing more concert performances with minimal staging. That's not a bad thing at all, if it means resources are put into great singing and orchestras of the calibre of the Philharmonia. Less is often more, because it focuses on the essential drama not the trappings.

Peter Sellars shows what can be done. He uses the Royal Festival Hall as his canvas.As Isolde's ship docks in the harbour (which we don't actually need to see), Matthew Best appears, spotlit, in the Royal Box. As a king would. The gulf between Isolde and King Marke made real in the way no stage setting could express. Von Otter's Brangäne occupies the ramparts upper level, side stage, trumpets are heard from far away. Sellars incorporates movement into this concert performance as effectively as any full staging.