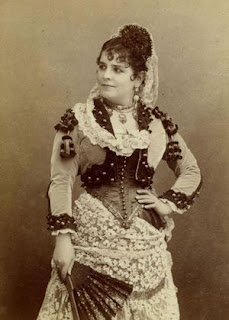 It's interesting not only because it's so early, but because Mlle de L'isle's aunt and teacher was Célestine Galli-Marié (1840–1905), (pictured left) the first Carmen, who worked with Georges Bizet. Célestine, a star of the Opéra-Comique, was also a friend of Massenet, premiering Charlotte in Werther. Jeanne's grandfather was a very famous bass. Interesting how singers then operated as family businesses. That's how singers as young as Malibran got ahead, making their debuts in their teens. Rare now.

To quote Vincent Giroud :
"What is particularly impressive about (Mlle de L'isle's) interpretation, apart from the perfect execution of vocal ornamentation (including occasional interpolated grace notes), is the lightness of touch and lack of affectation. No tragic femme fatale, she brings to the role, instead, unusual touches of youthfulness and charm, particularly apparent in the Dance—perhaps, one wonders, to her own castanet accompaniment. She “speaks” the role, never shouts it, and for once, Bizet’s expressive direction for the “Card Scene,” “simplement et très également,” is taken literally."
at September 07, 2010