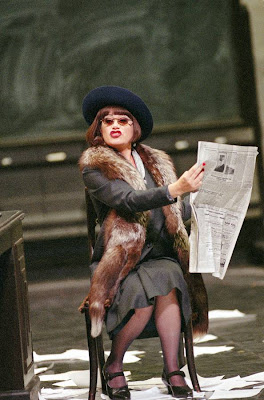 Janáček doesn't work for me in English so I avoid recordings like the plague. Live performance, however, is different because staging adds an extra dimension. This ENO revival of Christopher Alden's The Makropulos Case, at the Coliseum, with magnificent designs by Charles Edwards,  is so stylish that you focus on the drama rather than the disjuncture between syntax and music.

Green marble, Art Deco elegance brings the story right up to the time the opera was written. Janáček might have visualized it thus. Elina Makropulos might have found it strange, but Kamila Stösslová would have loved it! Even the fox-fur wrap references another Janáček femme fatale, the Cunning Little Vixen. And EM holds a newspaper - as if Time meant anything to her. Brilliant!  This is staging done with musical intelligence.

The Gregors and the Prus have been scrapping for 200 plus years over a missing will. In Dr Kolenatý's office, papers fly about out of control  like a flock of mad chickens (another Janáček clue), and rows of men like robots line the walls. It takes a feisty Janáček heroine to come up with the solution.

Crowd scenes here beautifully done, expressing a purpose - other ENO directors take note! The Second Act, where the men converge outside glass doors reinforces the idea that EM exists in an existential bubble, her thousands of admirers mindlessly conforming.  EM's situation is Extremely Mad but no-one questions. They'll kill themselves, like Janek, but don't they know who she is and where she's come from? She knows why she rejects Gregor's lust and uses the current Baron Prus.

This staging is exceptionally musically literate, Charles Edwards delivers yet again. Christopher Alden's direction is very good too, though the singers don't move as stylishly as the plot would support. This opera turns en pointe so sharply, singers need the physical flare of dancers.

This cast is reasonable, nonetheless. Amanda Roocroft's a popular if safe choice. Comparisons with Elisabeth Söderström would be completely unfair, but even Cheryl Baker had more sass. Still, Roocroft fills the role, costumed as she is by Sue Willmington like Anna Wintour, We can fill in the "Nuclear Wintour" persona ourselves - it fits the role very neatly!

Andrew Shore, Peter Hoare, Ashley Holland and Alasdair Elliott impressed as the hapless men and Laura Mitchell as Kristina. But this being Janáček, pay attention to the minor female role of EM's maid, a familiar chorus member now given a chance to show  how good a character singer she can be. Use her more !

Charles Mackerras reputedly said it didn't matter if Janáček singing was in English, because he knew Czech.  Yet opera is voice. If the singers are doing stresses alien to the music it's a problem whatever the conductor might be doing.  Long ago, there were reasons for making Janáček accessible  to English speakers, but now the repertoire is so familiar the logic doesn't apply.  As Elizabeth David said, "In those days olive oil was something you bought at the chemist to clean your ears". Times change. Ideally, this excellent production could be revived in the original language, with a more idiomatic cast.