The world did not collapse because the Met staged a new production of Das Rheingold with Robert Lepage's ultramodern staging. See HERE for reviews with photos. Unprecedented expense - the floor had to be reinforced before the sets could safely be installed. The ultimate "special effects" production. Maybe that's what stunned the audience into submission.  Why not . We all know the story and spectacle is definitely what Wagner would have enjoyed.

So why the fuss in the UK press about Gounod Faust at the ENO? Des McAnuff's Faust is going to the Met soon, so maybe for a change NY audiences will be primed to appreciate it better after the shock and awe of Rheingold.

Ironically, McAnuff's Faust is a lot closer to Goethe than Gounod was.  Being a theatre man he goes straight to the heart of the drama. What a story! A  holy old man selling his soul to the devil for a day of youth. He causes mayhem yet is redeemed by love. Goethe didn't need, as Gounod did, to pretty the tale up with divertissements to please the Paris audience. Gloire immortelle de nos aïeux is so wonderful that Gounod had to adjust the plot around it. It had to be "Frenchified" to work. While the essential bones of the story are there, Gounod uses extras like Siébel and Wagner, and some of the Gothic edge is smoothed away.

Plenty of accurately dressed French peasants in the ENO production, so why the fuss? So what if McAnuff's first scene takes place in what looks like a lab? Faust studied the Black Arts, and was completely aware that knowledge can be dangerous if it's used for evil purposes. He called up the Devil, after all. What could be more apposite than atomic bombs? They don't stay in view for long, anyway, and the complex structure of spiral staircases lend itself well when Méphistophélès scoots about from on high. 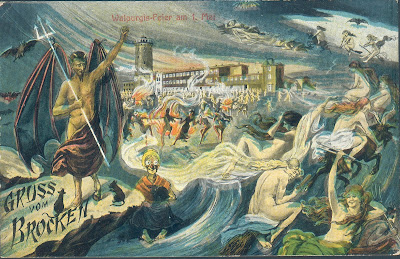 Similarly, why not psychedelic effects and lurid lights? Witches are afoot in Walpurgisnacht, which is traditionally associated with glowing lights in the mist and bonfires to ward off evil spirits. See the industrial-looking observation building (1890's)  at Brocken in the Harz where Goethe's Walpurgisnacht supposedly took place. (click to expand for detail)

The ENO Faust deserves a lot more respect than it's given. I don't know how Toby Spence was singing on the first night, but the night I went he was very good indeed. Vocally clear and sweet-toned, as befits the "youthful" Faust. Which is how Gounod wrote the part - not for a hefty baritone. Remember too that he knows the part in French. Even if he's a native English speaker, he's a musician accustomed to hearing the musical logic of the original.  Generally good performances all round.

Wouldn't it be ironic if notoriously conservative New York audiences got more out of ENO's Faust than supposedly sharp Londoners ? Now that would be Faustian. Please come back, I'll be writing abiout the Met Lepage Rheingold soon. Search around on this site. There's LOTS on Wagner, The Ring, Stagecraft and Robert LePage.