In the Penal Colony Glass Kafka 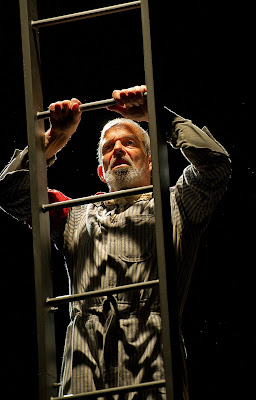 Impossible to relax after experiencing Philip Glass's In the Penal Colony at the Linbury Studio Theatre of the Royal Opera House, (Music Theatre Wales production). This isn't an opera anyone could "like" but anyone who can't be moved, disturbed or unsettled isn't fully human.

A Visitor arrives in a remote penal colony. He's completely neutral, insisting his opinions don't count because he's not involved. But he's asked to witness an execution, where words are drilled into a prisoner's body. Much too horrific to describe here. Read the Kafka story. It's just completely insane.

The Visitor tries to avoid emotional engagement or any form of moral responsibility. The condemned man is so conditioned to brutality that he accepts his fate mindlessly, like an animal. The Officer is so obsessed with the former Camp Commandant that he thinks of the execution machine as semi-religious duty. Crimes and non-crimes are irrelevant, the only reality is the killing machine.

Glass's music whirls,unearthly sounds projected over a string quintet, mechanical merging with live music, as precisely as cogs in a machine. The endless repetitions fit the plot as tightly as a straitjacket. "Efficient, quiet, anonymous", as the Visitor explained he'd like to be. You're half-hypnotized by this strange semi-trance music, just as the protagonists are numbed into accepting their circumstances.

Yet the repetitions move with a crazy logic, sometimes up a notch, sometimes disintegrating into cacophony (such as when the Officer thinks of his homeland - a last glimpse of the man he once was). Pay close attention to the subtle gradations. Like good film music they affect emotions subliminally. You understand how people in the penal colony become machines.

Omar Ebrahim, who sings The Officer is extremely experienced in contemporary music theatre. His vocal range is prodigious, though not used here where the monotony of the music is part of the plot. Nonetheless,Ebrahim brings surprising lyricism to the part. Some passages shimmer with the fervour of Bach. The Officer's dedication to his old Commander and to the machine demands total sacrifice. Blasphemy, perhaps, but in the insane world of the penal colony, there's crazy logic to the idea that the Officer should offer himself to the machine as it falls apart.

It would be so easy to lean back and say, it's Glass, it's gloomy, therefore no need to bother. No need to get engaged with the ideas here because they're too bizarre. Nod off and think about something  twee. But that's how barbarities like those in the Penal Colony happen. People don't get involved, don't take responsibility. Once you trivialize emotion, you lose your humanity.You end up like the Officer who thinks that because he's got status, he doesn't have to think. And because he's lost the ability to think and feel, he loses himself. Scarily, the Prisoner is well on the way down that route, too.

Get to Into the Penal Colony while it lasts. The short run ends Sunday and you'll have to brave the Papal crowds to get there. You won't enjoy it, I guarantee. But if you're not moved and disturbed, or confronted mentally and emotionally, I just don't know. I spent years researching war crimes and thought nothing would scare me. But this does, because the implications are that we're all in Penal Colonies if we don't question or act. Formal, "proper" review HERE with more detail on the music .