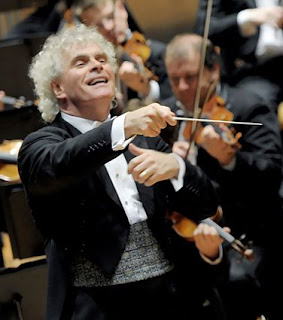 A week after their concert in Berlin, the Berliner Philharmoniker and Simon Rattle brought Mahler 1 and Beethoven 4 to Prom 65.  Silly to nitpick comparisons between performances, though London was more relaxed. Not a bad thing with Mahler's First Symphony and its youthful exuberance.

A ravishing start - extremely quiet, demanding careful attention, for out of the stillness emerge twitches of sound : the music awakes, as nature awakes. The Ging heut' theme rises tentatively, then strides forth confidently, the whole orchestra surging together, Emmanuel Pahud's flute der lust'ge Fink, urging them ever onwards.

Rattle respects the marking Nicht zu schnell, because it emphasizes the angular walking rhythms.  Always the sense of being at one with a wayfarer, alert to the sounds around him.  A single double bass, then bassoons and low strings: pre echoes here of Fischpredigt and even a jaunty theme defined by cymbals and timpani : a germ of the Dionysius march from the Third Symphony?

Clapping between movements here would be barbaric. Mahler's silences shape his music. Sturmisch bewegt here was an explosion, all the more cataclysmic because it emerged from a void.  This felt dangerous, (especially in Berlin) as if Rattle and the Berliners were teetering dangerously on a precipice, shocked by the immensity of what's before them. The madness of Ein glühend Messer, ein Messer in meiner Brust, glimpsed in alarums, sharp attacks, and edgy cross rhythms.

Rattle plays up the dynamic contrasts, for this outburst is central to the explosion of creative ideas Mahler was embarking upon.  On the filmed version in Berlin the camera switches to a close up of the score, lingering on the quiet passage that emerges from the chaos - exceptionally well-informed filming.

Just as the song cycle ends with a vision of warmth, the symphony ends joyfully. Huge, swirling textures from the Berliners, almost too heady to be quite realistic. But that's an insight in itself. This finale is glorious, almost out of proportion to the simple vision of nature with which it begins. Is there a quote, there of Handel ? "He shall reign, he shall reign, he shall reign forever and ever". Village lad as Messiah? The seven horns stand up like a chorus of angels, heard from heaven. But that's what it must have felt like to Mahler, embarking on his journey, conquering his inner demons through his art.

We've all heard dozens of Mahler Firsts but this was exhilarating because it was so well observed and aware. I liked the way Rattle connected Mahler 1 to Beethoven 4, spotlighting the similar beginnings. Since the Friday Berlin broadcast (available on demand) I've come to appreciate Beethoven 4 in connection with Beethoven 6, the "Pastoral", also a vision of nature in the countryside. A storm explodes there, too, but it's cathartic, clearing away rather than merely destructive. Just like Mahler 1

No way could Rattle have programmed Beethoven Fourth after Mahler First, it wouldn't sound right. (Mahler 1 and Beethoven 6 would be too much).  But the comparison is relevant on a much deeper musical level than the nonsense about the symphonies being written after love affairs. For composers like Beethoven and Mahler, the main love affairs of their lives was with their creative spirit.

Please see my other posts on Mahler, Mahler 1 etc., including oddball  "Mahler and the Tarot" (for Mahler is quite quirky!) . In this anniversary year everyone's carving out their commercial stake in this composer, but I'm just trying to download 40 years of listening experience in the hope it might be useful to others.
at September 04, 2010