Mahler and the Tarot? 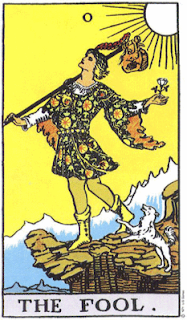 Gustav Mahler and the Tarot? Obviously there's no evidence of him believing in esoteric divination. But the Tarot is steeped in western culture, stemming from archetypes that have symbolic meaning to anyone versed in the Bible or European folk culture.  Which Mahler was.

The Holy Fool is the first card in a Tarot deck  "Fool" in this case does not mean foolish, but someone totally open and pure, setting out optimistically on a journey into the world.  Child-like in the sense of being non-prejudiced, non-judgemental.  Medievalists correct me, but weren't there folk movements in the Middle Ages, where people danced as "Holy Fools", in defiance of Death and Authority at times like plagues and famines?

Usually the Fool is depicted on a precipice but the crucial question is, will he fall or will he take flight? And he might just get lucky and carry on without noticing.

A dog, or sometimes a wolf chases him, symbolizing both dangers of the wild and of domesticity. Stopping is not an option. Sometimes the dog pulls the Fool's trousers down, typical medieval levelling down, not lost I suspect on someone like Mahler.

The Holy Fool carries a pack, but his baggage is light. Often he's shown holding roses or herbs, because he's idealistic, searching for beauty and knowledge (maybe occult pharmacology, too). This depiction's true to Mahler because it shows an Alpine landscape. Peaks to be scaled, difficulties to overcome.

So bear the image in mind when listening to Mahler's First Symphony. It's Mahler striding confidently out into the world.  He carries with him a background in "serious" music and also in folk culture (albeit filtered through middle class intellect) but it doesn't hold him back. Indeed, his songs infuse the symphony, pushing it forward. Thus the "walking pace" of this symphony, grave and deliberate but sprightly. This is a young man's symphony with all that implies - brashness, naivety, self absorption as well as boundless energy and verve.

"Here I come" Mahler seems to be saying. Destination unknown, but the joy is in the journey.  How this symphony is performed tells us much about conductor and orchestra, and how they relate to Mahler's traverse as a whole.  There is horror in this symphony, a storm perhaps - but it moves on, undaunted. Sometimes this is called the ""Titanic" symphony, a reference to the Titans of Jean Paul.. But maybe that's premature as this symphony's vivacious rather than careworn. Though many young men think the woes of the world are on them.

Tarot symbols are interpreted intuitively.  Obviously Mahler 1 isn't "about" the Tarot literally, but thinking about it in terms of wider European culture may sharpen our appreciation of the symphony's treasures.

Sir Simon Rattle conducted Mahler 1 in Berlin on Friday and will conduct it again this Friday at the Proms, also with the Berliner Phiharmoniker. I'll be writing up tomorrow or Friday.
at September 01, 2010

Email ThisBlogThis!Share to TwitterShare to FacebookShare to Pinterest
Labels: Mahler 1

Tarot cards were initially used for playing a type of trick taking card game still played in continental Europe. I don't know of any classical composers who were involved in divinatory Tarot but I do know that a few Austrian composers were enthusiasts of the Tarot or Tarock card game. Mozart is one such composer and the Tarot deck used during the time of Mozart used the French suit signs of spades, hearts, diamonds, and clubs and the trump cards had pictures of animals. Similar French suited Tarot cards are also used in France and central Europe for game playing.