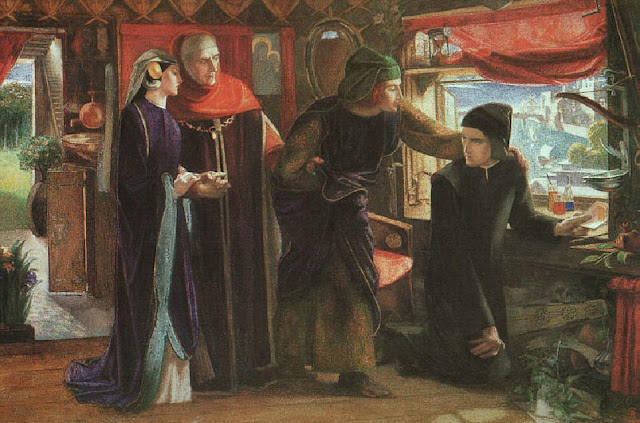 Special exhibition The Pre-Raphaelites and Italy opened this week at the Ashmolean Museum in Oxford, and runs until December.  Everyone knows the famous Pre-Raphaelite paintings of blowsy women, medieval and biblical myth. This exhibition, however, shows how they came to be "pre-Raphaelite" in the first place. They wanted to be "Pre-Raphael", going back before the baroque.

Romantics went to Italy to imbibe Classical antiquity and discovered sunshine. The Pre-Raphaelites, though, differed from Goethe and Turner in that they made their art for middle class Victorian society. Craft as much as High Art. This exhibition places them firmly in a stream of idealistic 19th century thought.

Just like Goethe, John Ruskin went to Italy to study. He recorded what he saw as literally as possible.The minute detail shows his craftsmanship. Ruskin didn't do people or have real relationships, not even with men, but he inspired others who were better artists. Hence the Pre-Raphaelite thing for fancy furnishings and perfect detail. Photography's killed that kind of art. When rich hippies discovered the Pre-Raphaelites in the 1960's what drew them was the way the exaggerated reality of these painting becomes psychedlic and unreal.

But back to Italy: Dante Gabriel Rossetti, though British in many ways, identified with Dante Alighieri.  Hence numerous paintings, pen and wash sketches and writings on the theme of Dante and Beatrice. In fact,  his relationships with women were an extension of this. Rossetti liked unattainable women, apart from Fanny Cornforth, the hooker whose portrait screams out of the wall where other Pre-Raphaelite goddesses hang.

Above is Rossetti's Dante painting Angels, where the poet is seen as obsessively drawing angels that remind him of Beatrice. His friends try to distract him. Perhaps the woman is telling the priest that Dante's "got issues". Meanwhile, outside the cramped studio, nature, growth, freedom. The studio is not all that dissimilar from cramped Victorian morality.

Don't go to this exhibition expecting the usual army of famous, luminous paintings, which you can see anywhere, like on postcards and CD covers. Instead, go to the Ashmolean because this show is thoughtful and scholarly. Many pictures aren't normally on display, like the etchings and line drawings. This is your chance! Some are borrowed from Tate Britain and Italy, and some from private collections.

Oxford was a Pre-Rahaelite hotspot. Ruskin went to college here, accompanied, significantly, by his mother. Janey, the raven-haired muse Rossetti loved and William Morris married, grew up in a hovel in the narrow alley that leads to the 12th century Turf Tavern, which leads onto Holywell Street. Oxford's gargoyles and medieval corners are a part of the Pre-Raphaelite ethos.

So it's even more interesting that the Asmholean presents the Pre-Raphaelites in a wider, European context. One important group were the "Etruscans" who painted wide angled horizons, imaginging a world as people-free as an Etruscan dream. Their leader was Giovanni Costa, an Italian patriot who hung out with Garibaldi and influenced Frederick, later Lord Leighton, whose elaborately-decorated house is now a London museum.

This exhibition was curated by the Ashmolean for display in Italy, hence the Italian Connection. But here were other European art movements inspired bty Italy, too, such as the German Nazarenes, one of whose followers was Wilhelm Henschel, husband of Fanny Mendelssohn. European art was not insular. Decades before the Pre-Raphaelites, the Nazarenes were doing their thing in Rome, Berlin and beyond. Now there's another theme for an exhibition.
at September 17, 2010