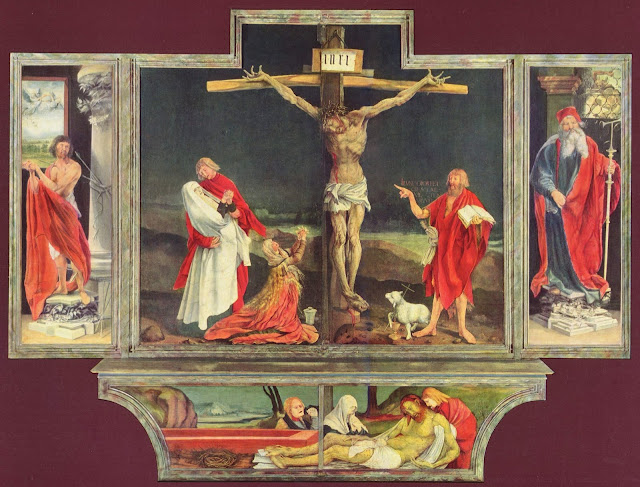 Hindemith's Mathis der Maler with the Gustav Mahler Jugendorchester (Prom 62) should have been a wonderful experience. The GMJO redefine the term "youth orchestra". Claudio Abbado's vision was to give young musicians the finest support and coaching possible, to treat them like serious professionals so they'd be inspired to play like fully fledged artists, not just another collection of bright kids. Eyes closed you can't tell how old they are. That's the point. The vision is that youth can  be channeled into art.

Mathis der Maler is inspirational music, and no doubt the orchestra knows the background well, because it informs performance.  As the Weimar republic collapsed and Hitler came to power Hindemith studied Matthias Grünewald's masterpiece, the altar triptych at Isenheim, pictured above. (click to expand for detail).

Grünewald lived during the Reformation, so he knew all about schism in society, and how belief can lead to war.  The paintings depict horrors like crucifixion. Yet they're designed to make the viewer contemplate, and sublimate earthly pain.  Could, or should, modern music give modern people some sense of transcendence when evil reigns? Wilhelm Fürtwängler knew exactly what he was doing when he championed Hindemith and stood up to Goebbels.  When I found Fürtwängler's denazification file, there was a lot on Hindemith. Luckily there was enough evidence in his defence that the authorities didn't need to study the opera.

Nowadays when churches are full of tourists more interested in webcams than art, one forgets that paintings like these were made for intense, personal contemplation. Perhaps music, because it's more abstract, can give us that inexpressible inner dimension.

Certainly this performance was pleasant, because this music isn't "difficult" to take in even though structurally it's as complex as a triptych which can be viewed from many sides, including when it's closed shut. Herbert Blomstedt spent years in Dresden, one of the hot points in the Reformation, but for whatever reason, this didn't add insight to his conducting. Had this performance been directed by passion or insight it would have been truly beautiful in the deepest meaning of the word.

Abbado and most others who've conducted the GMJO have capitalized on their youthful energy, which is why this orchestrra has such unique character. If Blomstedt had let his players take more risks and play with greater freedom, they'd have reached real illumination. Technically correct isn't artistically correct.

Some Fischer-Dieskau fans denounce Christian Gerhaher, but I've always had a soft spot for him. Not though at Prom 62, where his Mahler Lieder eines fahrenden Gesellen was pedestrian, even in the better acoustic on broadcast. Isn't the young journeyman walking, you might ask? No, not really.  This set of songs was Mahler's preparation for greater things, just as Hindemith's symphony was a preparation for a much darker, complex opera.  The fahrenden Gesellen isn't really walking, he's covering huge emotional distances.  Just not in this performance.

Bruckner is spiritual, though I usually can't relate to his vibe (Messiaen works miracles with me) so it was unlikely that I'd benefit from Blomstedt's Bruckner 9.  So here's a treat - Hindemith himself conducting Mathis der Maler (stretched over 4 parts). Get a good recording and hope that the GMJO will play it again.