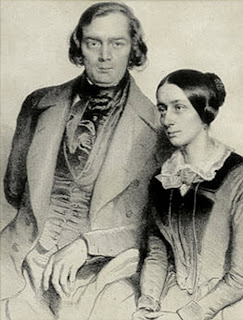 Schumann is a perennial at the Wigmore Hall.  This recital, with James Gilchrist, Christopher Maltman and Julius Drake, was well attended. Many friends in the audience new and old, By sheer coincidence two people, from different parts of the world met up, who'd both been in choirs where Maltman sang. The Wigmore Hall "family" spans the globe.

Whoever reorganized the order of the first songs deserves praise. Placing Trost im Gesang with Der frohe Waldersmann shows wit. Kerner and Eichendorff were very different men. Eichendorff was a devout Catholic, who shaped the idealistic Prussian education system. Kerner was a medical doctor who believed in what we'd now call pseudo-science – mesmerism, spirit messages etc. Yet which was really the more unconventional? 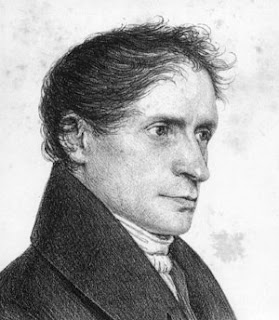 Kerner's traveller sets forth, confident that song will guide him on his path.  Eichendorff's traveller thinks about two quite different paths but hopes that God will arrange things right. The pious mood is underscored by something more troubling. Double-edged piety, like Mörike's Gebet. ("send me what you will, God, but not too much either way)"
In  Eichendorff's Fruhlingsfahrt, two sturdy youths set forth, both striving for lofty things. One finds happiness in simple things. The other is seduced by the sirens of the deep and ends up a shattered wreck. Both Fruhlingsfahrt and Der frohe Wandersman show that  Eichendorff's fascinated by wilder shores even while he praises domesticity. His homilies to God are talismanic, for he intuits that creativity can be dangerous. An artist is driven by something greater than his own free will.  Happy Wanderer? No way.
Perhaps Schumann, already aware of his own emotional extremes, intuited that Eichendorff understood the connection between art and madness. Eichendorff's poetry was "new" at the time, the poet outliving the composer. Hence the fearfully tricky phrasing in the song, and in Sängers Trost, which seem deliberately designed to knock a singer outside his comfort zone. Much credit to James Gilchrist for negotiating the difficulties so well. He's so engaged with meaning that he brings out the true spirit of these songs, which superficial performances don't reach.
Gilchrist is an ideal character tenor. Like Philip Langridge, he has the knack of getting inside a part, developing it through thoughtful observation and empathy. Gilchrist's spent most of his career in oratorio and song, but it is in opera where his skills in characterization are really needed.  As an actor, he's a natural because he's empathic, able to build personality into any part he sings. In opera, a singer with Gilchrist's emotional intelligence would do wonders.
I've never forgotten Christopher Maltman's Tarquinius in the Rape of Lucretia, where his body builder's physique gave the role a powerful, malevolent edge.  That's character singing, albeit in a different way.  While I was bothered by many things in Maltman's Liederkreis Op 39, my friends enjoyed it a lot.  Lieder is communication, so in that sense, it worked well.  There are just so many Liederkreises op 39 and 24, that we're spoiled.
Withe the Four Lieder op 40 to settings of Hans Christaian Andersen, Maltman could focus on each song as a vignette, for each tells a story.  Der Spielmann lets him created the fiddler wildly playing at a wedding. Then the punchline, Bin selber ein armer Musikant. The fiddler's more involved in the wedding than we realize. He's pulling back, emotionally, much as Eichendorff switches to God. 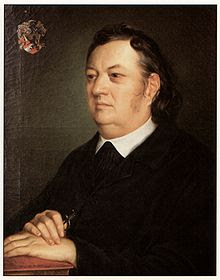 Schumann's 12 Kerner Lieder op 35 were the highlight of the evening.  This is a very tightly structured cycle, sometimes compared to Beethoven's An die ferne Geliebte, or even to a miniature symphony, even though the texts are a mixeed batch. This indicates that perhaps Schumann heard greater possibilities in them than a straightforward textual study might indicate.

Lust der Sturmnacht is strange.The poet wants the stormy night to continue because he can be with his lover. But can't they have fun without the wildness outside? Suddenly lust (in both senses) gives way to unearthly calm and purity. In Stirb, Lieb' und Freud', a young girl is praying, transfixed in rapture. The poet stunned to silence, knowing he can't compete with the Virgin Mary.

Gilchrist seems to intuit that this sudden switch between turbulence and ecstasy might just be what drew Schumann to put these random poems together in this order. Schumann was obsessed by cryptic puzzles and hidden clues. In this cycle the "tavern songs" are popular but drinking songs they aren't. Drink lowers defences, releasing ghosts, memories and suppressed emotion. The two key songs are moments of quiet contemplation: Stille Liebe and Stille Tränen.  Because Gilchrist captures the extreme mood swings so well, he captures the schizoid character of these songs. On the surface they don't fit together but if the highly literate Schumann heard connections, so should we. Wonderful, vivid singing, animated and expressive.

Afterwards, I told him that it was so good that it didn't matter if one single word wasn't ideal, in an otherwise outstanding performance.  "But it matters to me!", he saIt's that emotional honesty that makes Gilchrist an ideal character tenor.

Last week, when Julius Drake played Hugo Wolf, he hammered away so forcefully that someone commented that the piano might be faulty. At the Wigmore Hall, pianos are objects of sacred veneration. If a piano was out of tune, someone would be lynched.  Fortunately, this time Drake gave much more respect to tempi, dynamics and singers.  Much better!
COMING UP tomorrow: Makropulos Case,  Jurowski Mahler 3 and more.
at September 23, 2010