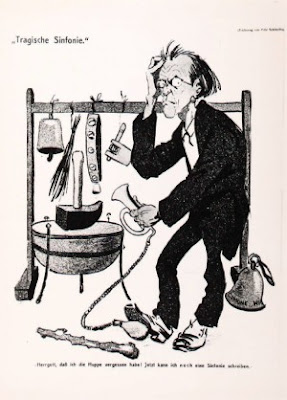 Currently circulating round is a website that is legit but looks like a spoof.  This Mahler anniversary is becoming a pigs trough.. Everyone wants to make money, to set up their stall. But many ventures are like GUM department stores in the former USSR.  Imposing furnishings, nothing on the shelves.

This latest project is called "The People's Edition" where people vote for recordings that go into a boxed set. Who are "the people" ?  Can't be seasoned Mahler fans because they already have the better known recordings.  Besides, real fans can't limit themselves to any one "best". That's how trolls think, real people don't. In any case, can quality ever  be measured in this way by a self-referential self-appointed sample ?  Or by any vote ?

There's an inherent artificality in this, a sort of Hit Parade mentality. Or Eurovision Song Contest.  Or Fantasy Football.  So what if X hundred people think one performance is the best ? X hundred others might  think quite differently. Nothing wrong with boxed sets per se, but there has to be a musical rationale behind each one.

You can't compare different symphonies by different performers at different times. There are just too many variables. The more you listen, the less the idea of some interchangeable mean makes sense.

Ultimately there's no Instant Fix to Mahler. Much better that someone coming to the composer fresh listens bit by bit, absorbing each work in whatever order they come. Learning only comes by experience, by hearing enough to learn to make judgements based on what you've absorbed.  Get to know each symphony, by many performers, gradually building up. Superficiality sets you back. Focus on the longer term. The Big Picture doesn't emerge until you've learned the idiom, in your own way, in your own time. No need to be an Instant Expert.

What worries me is that this sort of thing narrows the range. Human beings play safe, naturally going with the mass rather than on their own.  If "popularity" legitimizes taste, rather than variety or quality or experience  it narrows the gene pool. It's a sterile exercise leading nowhere.  "Readers Digest" sets always sell to folks too scared of making their own choices So someone will benefit. But not Mahler.

Someone mailed me to say that this Mahler People's Edition is  OK "because it will only sell to newbies". I'm sorry but that shows utter cynical callousness not only to the cvomposer but also to the many who are coming this year to Mahker for the first time. These are thge very peiople who deserve respect and good qaulity advice. But instead what they're getting is shameless exploitation. An ordinary box set is fine, because it only represents one persons's taste but the idea of a "People's Edition" is spurious and unethical because it implies that somehow it's the result of majority opinion. Nonsense, anyone could "vote" in this poll and as many times as they wanted. Moreover, "voting" like this means nothing as there's no basis for comparison - or for evaluating what any voter's credentials might be. No point discussing the merits or otherwise of the choices (quite odd)  because the whole premis of the project is nonsense. The premise is a con designed to give apparent legitimacy to what is lunatic logic. Newcomers to Mahker don't deserve this cynical treatment. DG  should be  ashamed. Newcomers to Mahler, be warned.
at September 09, 2010

Email ThisBlogThis!Share to TwitterShare to FacebookShare to Pinterest
Labels: mahler

I found the idea ridiculous and an insult to the music. Though I must recognize it gave me the opportunity to listen to recordings I did not know or which have been deleted. But the whole concept makes you freaky about the people in charge.

Additionally, performance practice and consumer tastes are always shifting, always evolving; the vibrato / portamento style of early twentieth-century orchestral recordings is currently out of favour; people now prefer the white-knuckle ride of a Gardiner or a Norringon disc to the funereal pace of a Furtwangler.

There can really never be a 'definitive' edition or authoritative recording - not even whden the composer himself is conducting, considering how different Stravinsky's recordings can be from one another. Performance practice, scholarship and listener tastes are changing all the time, making such an idea unrealistic.