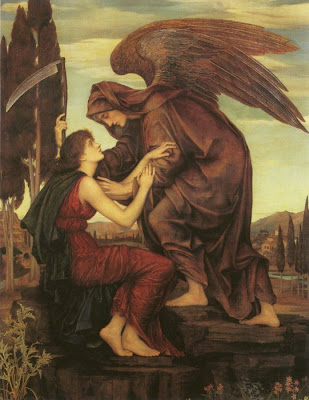 The Blessed John  Henry Newman, now, as John Cardinal Newman is beatified by Pope Benedict. Everyone's trying to second guess why, but it's irrelevant. The real big deal is that Newman is not a typical saint, but a person whose life is an example for the future.

Newman was a man of conscience. He had integrity, and turned his back on family, status and glory. As a Catholic, his career wasn't successful.
He suffered.doubts, conflicts and possibly clinical depression.  He wasn't even that keen on papal infallibility. Yet what got him through was idealism and integrity.

No human society has ever existed without spiritual or moral beliefs. So what's wrong if some choose one way or another? Quite possibly being fully human means respecting others' rights. What does militant atheist evangelism prove?

We're all going to die. Even if there's nothing on the other side the fact of mortality affects how we live and feel. Perhaps Cardinal Newman's real miracle is that through The Dream of Gerontius, he's helped millions to face loss and death, and in the process discover the beauty of life.

Elgar's music starts in the world, elegiac, recurrent crescendi full of portent. Gerontius knows he's dying. The violins stir like the fluttering of giant wings. "This strange innermost abandonment", Already, the concerns of the world are eclipsed. Gerontius isn't alone, he's surrounded by a host of immortal presences, all praying support.  Wild surging trumpets, evoking "that sense of ruin which is worse than pain". The man's terrified, hearing "hideous wings" but remembers that this is a journey many have taken before. Huge outburst of choir and orchestra. "Go Forth!" The baritone is the tenor's stronger alter-ego. pulling him onwards. Fairly straightforward piety, so far.

But then something really amazing happens. The transition starts with a beautiful, humble theme which we'll recognize as "the heart subduing melody" the man hears as he's lifted upwards. "I went to sleep", he sings in a matter of fact way, but gradually feels lightness and freedom. "How still it is! I hear no more the busy beat of time" The marvel is that he's safe, cradled by an angel.

It's Gerontius's Guardian Angel, who has taken care of him invisibly since he was born.  "My work is over" she sings, now that she's handing him back to God.  Gerontius's soul wonders why he now feels no fear. "It is because then, thou didst fear...and so for thee the bitterness of death is passed".  To put it plainly, if you have no conscience in life, you'll pay for it in the next world.

Sure enough, they pass the Demons who claim those who've been bad on earth. Wild frenzied, ostinato stabs of brass and percussion. The choir of demons scream. "How sour and uncouth such a dissonance" sings Gerontius's soul. This is Newman being ascetic, and Elgar showing a  sense of humour. What demonic, violently expressive music! Isn't it deliciously manic when the demons snarl "Haha! Haha!"

As they cross into the Hall of Judgment, the soul hears  "a grand mysterious harmony. It floods me, like the deep and solemn sound of many waters"  Angelic choir, and then peace reigns as the Soul enters the presence of God. The baritone who sang the priestly figure now sings the Angel of Agony, a tougher version of the Guardian Angel. He makes a direct connection between the sufferings of Jesus condemned on the cross.

"Alleluia" sings the soprano piercingly, at the top of her range, and the orchestra follows with a vivid, penetrating fanfare. Now the soul enters purgatory, visualized as "penal waters" of a lake. it's a cosmic lullaby, for while the soul lies in these depths it will be protected by angels and the memories of those left behind on earth.

"Be brave and patient on thy bed of sorrow" sings the Guardian Angel, "Swiftly shall pass thy night of trial,, and  I will wake thee on the morrow" (meaning the end of time).  Heavenly coda, strings and harp, a sense of uplift.

Hell exists in most cultures. In reality, most evil people get away scot-free. Yet a belief in the Afterlife implies that there are higher powers, divine justice that can't be bought or manipulated. The bad don't get away with it though they think they can. This has implications for how we live. Not that heaven or hell is any deterrent for those who really don't care. But it is hope for those who do.

Explicitly, the Angel of Agony sings of  "Souls, who are in prison, calm and patient, wait for Thee",  In life, we're all in a kind of prison and suffer. We have a responsibility to do good, but sometimes evil overwhelms.  What the Angel means is that faith and  patience give us strength to endure horrible things. Hate isn't the only way. If that's not a relevant message for today, what is?

In 2007, the Dream of Gerontius at Gloucester Cathedral. was fully sold out, but at the last minute I was unexpectedly given tickets. So I took a friend who'd been through months of trauma.  Then the music started and she felt a sudden rush of inexplicable but intense peace. Then she remembered how her father, who had died a few months before, had loved Elgar and may have heard it in Gloucester when he lived nearby in his youth. (He was Catholic and didn't normally do C of E). There's no point rationalizing such things. Emotionally they feel true, and if they bring such comfort, who can complain? She's not the first, nor will be the last, to be affected by the Dream of Gerontius. Perhaps that's the kind of miracle a self-effacing man like Cardinal Newman would have liked - simple, but profoundly helpful.


Please forward this on to anyone you think it might help.  There is lots more on this site on Elgar, Three Choirs, Messiaen, war, social issues etc.
at September 19, 2010

The Dresden broadcast by Colin Davis is still available on France musiques (until October 9): http://sites.radiofrance.fr/francemusique/em/concert-soir/emission.php?e_id=80000056&d_id=410002029&arch=1