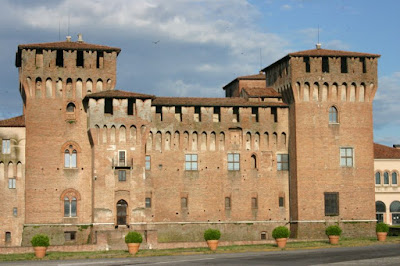 RAI's live TV film transmission from Mantua of Rigoletto should please those who think opera "must" belong to a specific time and place and can never be updated.  What better then than Rigoletto shot in the exact spots Verdi thought about, and even at the right time of day?  Scenery like this wouldn't be possible in the theatre.There never will be anything more authentic. PLEASE READ THE NEW IMPROVED REVIEW HERE on Opera Today, It's much better !!!.

Visually this film is truly spectacular - what panoramas, what incredible detail in the interior shots. The "sets" are painted by Mantegna, no less. Gardens shot in natural light, with living hedges.  Sixteenth century furnishings. You realize what a warren the complex of buildings round the palace are, a metaphor for the machinations at court. And the phenomenal scale of this production, available in simultaneous broadcast in 148 countries from Japan to South Africa.  You have to be impressed by the audacity of the vision. With modern technology and telecommunications, this tops the famous Tosca in Rome 20 years ago, (with real bells and real ramparts but fake suicide), also produced by Andrea Alderman.

Of course Verdi visualized the opera in these surroundings, because they pack a powerful emotional punch on culturally aware Italians (ie every Italian, as they don't grow up not knowing heritage). But opera is drama, not reality and certainly not historical fact.

Plácido Domingo's Simon Boccanegra was an artistic ttriumph because his voice fitted the role perfectly (and wasn't exposed by long arias).  As Rigoletto he's more challenged , but again, his acting is so intuitive that he makes Rigoletto a thoroughly interesting person.  If this Rigoletto lies somewhat too high and Domingo can't quite make the long legato, so what? Rigoletto is a hunchback, and congenital dwarves don't often have big lung capacity. Domingo's Rigoletto feels like an old man who's sick of life and its twisted games and has nothing left to fall back on but Gilda. There is an evil side to the part which Domingo doesn't develop, but he's extraordinarly moving in the scenes with his daughter. The despised buffo becomes a handsome hero ennobled by his love. Unlike the real nobles around him. As Domingo says before the film, "so the singing isn't perfect, but opera is drama". Another nail in the coffin to the theory that opera is "only" about vocal gymnastics.Please see my post where Paolo Gavanelli discusses the tessitura in Rigoletto - quite relevant for a tenor ! 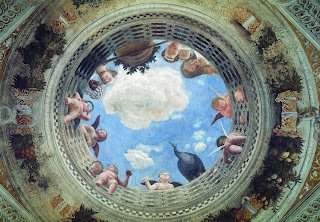 Besides, this was a live performance in the sense that what was shot happened.without lots of takes. The singing was realtime, the orchestra piped in from an auditorium nearby. This accounts for some slight discordance in parts, but that's to be expected, considering the logistics.  These certainly aren't studio conditions, so it's silly to even expect clinical perfection. Timing, orchestral clarity, singing and acting aren't studio quality either.

But this performance works, as film. It's completely different from theatrical conventions, so can't be judged in the same terms.  Directorial and photographic details play a greater part. There are shots here a theatre-constrained director would kill for. As Rigoletto runs from the courtiers, there's a shot of his anguished face against the famous Mantegna ceiling with its frescoes of cherubs. Everyone knows cherubs from Xmas cards and tourist tat. (click on image to expand). To the Duke, (sexy, fleshy Vittorio Grigolo), the trompe de l'oeil was amusing, particularly if you look close up and see what might have interested someone debauched about the babes. Never look at those angels without thinking. But to Rigoletto this depiction of beauty is painful, constantly mocking his imperfection. For a moment, though, it's as if the golden circle forms a halo round Domingo's head.

There's not much a cloistered teenager can do to express character, so Julia Novikova's Gilda  is helped by the production.  There are many mysteries about Gilda, often underplayed. She doesn't know her parents' names, and accepts Gualtier Maldè without question. No completely  rational girl would suddenly chose to die like this, before she's even lived.  Who is she, apart from having inherited her father's extreme personality?  Christine Schäfer is the definitive Gilda for me, because her cool exterior suddenly boils over, deranged and heroic at the same time. Paolo Gavanelli (how's that for name dropping) described her to me with the gesture "Wow!" 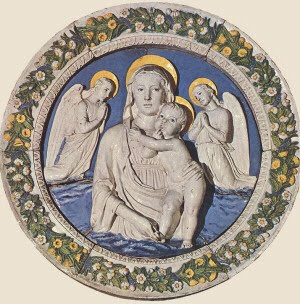 No chance of that depth with Novikova, who really is very young. But she's shot in a room filled with Lucca della Robbia medallions (real!). This is deliberate because showing her in the context of Madonnas and babies expands her character.  Gilda, with her convent-bred religious faith, thinks mindlessly in terms of love, death and sacrifice. Marco Bellochio, the director knows what he's doing. He understands the opera, and brings out its deeper levels. This deserves respect, for it's not something easily done on stage.

Where the live realism falls down is the Third Act, shrouded in darkness. Obviously murky shadows are part of the rationale, but when Ruggerio Raimondi's Sparafucile is obscured, it's not a good idea. Praise be for unnatural light. Perhaps the darkness caused the camera to focus on close ups which can be easily lit. Also, it shifts focus from Domingo's vocal muscles to his facial muscles, which become more mobile and expressive than his voice.

This RIA Mantua Mantova Rigoletto is significant because it shows the possibilities of film in expanding the potential of opera to communicate. We're still in the early stages of discovering what can be done.  Although this isn't the most ideal performance, it's a reminder that opera is drama, not narrowly theatre. Ambitious ventures like this prove that surroundings are only part of what goes into making opera dramatic. After this, there can be no more realistic production. That done, we can now focus on the essential drama, which, as Domingo says, is the real business of opera.

A better new version of this article will appear soon in Opera Today.

In the UK the whole opera is available online and on demand on BBCTV til the weekend.  Quite possibly also available online in other countries, where facilities exist. Avoid the youtube versions which break up every few minutes and ruin the flow. Horrible sound and incomplete, too.
PLEASE see my newest post on the broadcast on BBCTV4 at Xmas - more emphasis on the cinematic aspects of this production, which grow on you. Minus chit chat and continuity breaks, this Rigoletto is better on repeat viewing.
photo credit
at September 06, 2010

Please also write about Electra which screened this weekend (Sept 11 2010) from The Stockholm Royal Opera. Many operas are streamed - but how to know when and where?

Hello, and thank you. I'm sorry but I have been so busy theis last week, I could not get to this. But if you did, please let me kmnow whatb you thought.

I personally can't stand dramas where plots are lazy - even if Gilda is supposed to be naive, is she also monumentally stupid? Surely she would simply warn the Duke of the plot to kill him instead of 'sacrificing' herself.

Great songs - rubbish plot. Like so many Hollywood plots, a moment's thought could have made it work properly.