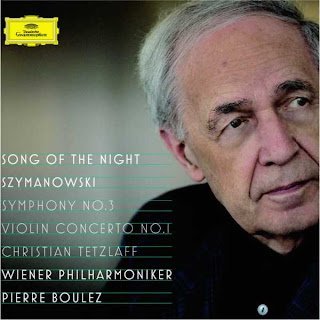 Karol Szymanowski and Pierre Boulez both have public images that don't reflect the reality of their art. This outstanding new recording should shake things up!  Boulez first heard Szymanowski in Lyon in 1942 (conducted by Ernst Ansermet)."It was one of those Rite of Spring moments", he says.

Szymanowski's adventures in the Middle East opened his mind to new possibilities in sound and texture. Think of Islamic art with its intricate patterns. Geometric shapes that proliferate, ever expanding and evolving as if they have an organic life of their own. One could say that of Boulez's own music.

Most people outside Poland learned their Szymanowski from Simon Rattle and CSBO, because he's very good. But nothing could have prepared me for the lucid glory of Boulez and the Wiener Philharmoniker. This recording opens up whole new prospects, making a case for Szymanowski as a major figure in early 20th century music.

Szymanowski's Violin Concerto no 1 and his Symphony no 3 come from around 1916, when he was making a creative breakthrough. To quote Jim Samson, the foremost Szymanowski scholar, writing as long ago as 1981, "the orchestra is conceived rather as a reservoir from which may be drawn an infinite variety of timbral combinations....the string body...sub divided into many parts, further characterized by the most delicate combinations of arco and pizzicato, harmonics, sul tasto, sul ponticello and tremolando effects".

Samson's The music of Szymanowski

is essential reading, the most analytical and detailed commentary anywhere. Read his structural analysis of the first Violin Concerto. "The formal scheme is totally unique and represents an ingenious solution to the problem of building extended structures without resorting to sonata form".  The almost chaotic proliferation of sub groups and themes within the orchestra are contrasted with extended violin cantilenas, soaring high above the orchestra, so refined and so rarified that they seem to propel the music into new stratospheres. Boulez's soloist is Christian Tetzlaff, who, even by his own exemplary standards, excels himself. Unbelievably heart rending yet poised. You "need" this CD if you have any interest in what  a violin can do.

Szymanowski's Symphony No 3 "Song of the Night" is utterly unique. It was inspired by Rumi, the medieval Persian poet, and describes ecstasy so intense it can only be revealed in darkness, beneath star-filled skies. Again, Rattle is the foundation, while Boulez reaches heights one can hardly imagine. Steve Davislim, for Boulez, outclasses Rattle's tenor, and the extremely important choral ululations from the Singverein der Geshellschaft der Musikfreunde Wien could hardly be surpassed. This performance is so committed and so beautiful that it feels like an otherworldly mystical experience, which is perhaps what the Persian sages intended.

The score calls for a massive orchestra with organ and extended percussion as well as massed choir and a soloist with stamina.  Because it's so overwhelming, lesser conductors (if they can hold it together at all), might be tempted to coast indulgently, letting the sheer size and exoticism of the piece impress audiences, Boulez, however, is much too good to coat this symphony in a veneer of treacle. (Neither does Rattle, but his orchestra is nowhere near as good as the Wiener Philharmonker.) Impressionist painters didn't muddy their brushstrokes, but kept them clear and defined. Boulez's legendary lucidity keeps Szymanowski's complexities clean, so the overall effect is sparkling,. The text refers to a night sky fiiled with myriad stars, shining so brightly the darkness is transformed. Szymanowski's Verklärte Nacht, but much more sumptuous and sensual.

To quote Samson again, "It is easy to appreciate the intoxicating effect of (the symphony's) ecstatic climaxes and floating, voluptuous harmonies on a younger composer  such as Lutoslawski  who claimed he 'felt  dizzy for a number of weeks after hearing the work"".  Boulez evidently felt much the same. which is perhaps why he conducts now when he has maturity behind him.

The CD comes in an elegant hardcover sleeve with a bonus disc where Boulez is interviewed in English, French and German. He's obviously been asked the same questions, but each time he adds something new. The French version's most detailed. The booklet that comes with the set is awful, though. The writer acts surprised that Boulez didn't start conducting until the 1950's. Of course not. A composer was what he wanted to be. And he thinks like a composer when he conducts, which is why he's so perceptive. Boulez absorbed a lot of different influences, including his mentor, Olivier Messaien, Bartok, Stravinsky, Debussy etc.so the idea of him absorbing Szymanowski on a deeper level doesn't surprise at all.

Please see my many other posts on Szymanowski including the piano music and String Quartets and Krol Roger. Lots on Boulez (and Messiaen) on this site, too.
at January 12, 2011

I just purchased this disc along with Rattle's. Listening to the first concerto as I write, I agree completely with your assessment. This is a truly magnificent performance. The only other I have is with Frank Peter Zimmermann (coupled with the Britten) on Sony; also a fine disc. Incidentally, the copy of the Boulez I obtained here in Korea is a single disc in a jewel case. (I suppose the local distributors felt the interview disc in German, English and French was redundant here.) There is also no essay about Boulez, merely a few pages about the music and, as advertised on a sticker on the cover, "...many behind-the-scene photographs." I guess I missed out on the deluxe treatment.

Have had Rattle's and Wit's version of Szymanowski's Symphony 3 for several years and have played them many times. Neither prepared me for this version by Boulez. Listening to Boulez speak on Szymanowski (in English) was a surprise, as I never would guess that Boulez would have the reverence he does for him. It's the amazing grasp of structure that Boulez imparts that is on a whole different level from the other recordings. It made me feel that I had somehow really grasped the work in a whole different and more complete way. Also the sound quality on the recording is terrific.
Thank you for your review, it was illuminating!