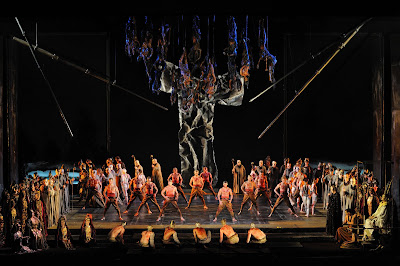 Verdi Aida returns to the Royal Opera House. First time round everyone seemed to hate it because there were no elephants. But surely Aida tells the story of oppression? Even the love interest gets crushed, literally.

This time round Fabio Luisis conducts instead of Luisotti, Alagna instead of Álvarez. Borodina, Michael Volle and Brindley Sherratt provide better than average support. I was sorry about Micaela Carosi because she's a genuinely nice person. She didn't project well last time, but she's done the role numerous times and knows it well. Liudmyla Monastyrska's voice I don't know. A stronger cast makes for a better production.

Two thoughtful reviews: Claire Seymour in Opera Today and Edward Seckerson. First time round there was a lot that I liked about McVicar's production. It addresses the drama at the core of the opera. As Seckerson puts it "The cleverest thing about his staging – I cannot for the life of me work out why it was greeted with such derision on its first outing – is that it honours the operatic grandiosity of Verdi’s camply picturesque Egypt but feeds big-time on the pagan rituals and inter-ethnic barbarity."  Empires are theatre. They subjugate their victims by massive displays of power and brutality. Hence the blood and guts and maidens dancing in the gore.

Aida is an opera that needs extremes. I enjoyed the Bregenz Aida because it was so extreme and even set on water. Such chutzpah! Pity the voices were inaudible, but what do you expect from open air?  This opera's very relevant for modern Europe where immigrant underclasses prop up the prosperous.  It's much darker than kitsch and elephants. But the shock and awe factor is essential too. Imagine a really shocking Aida that does both gritty and over the top? But who'd be able to sing over that tumult?
photo : Bill Cooper. Royal Opera House
at March 16, 2011