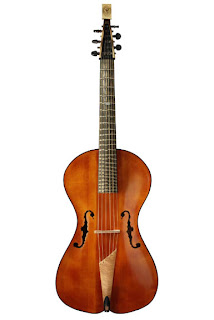 Schubert, but not as we know him. You can always rely on the Wigmore Hall to promote adventurous recitals. This concert with Sandrine Piau, Antoine Tamestit and Markus Hadulla was very unusual indeed, shaking up assumptions about voice and instrument, styles and genres.

First, a relative rarity, Schubert's Arpeggione Sonata D.821. It's seldom performed live. as the arpeggione is an antique instrument few can play. It's fretted like a guitar but bowed like a cello. The instrument was invented by a guitar maker  in 1823, so when Schubert wrote the sonata in 1824, he was pioneering completely new territory. Schubert was avant garde in his own time.

Nonetheless, Schubert's affinity for the guitar was rooted fairly deep in his life. I'm not sure if he played the instrument, but it was popular in 19th century Austria and played in social situtions. Hugo Wolf's mother was a keen amateur guitar player, influencing Wolf's music to a greater degree than is often realized. I don't know if Schubert played the guitar, but he would have been familiar with it and the situations in which it was played. There have been notable transcriptions of Schubert works like Die schöne Müllerin (op. 25, D. 795), adapted for guitar, which work extremely well. No wonder he was attrracted to the arpeggione.

The trouble is, the new instrument didn't catch on and there's almost nothing written for it in the repertoire. The Arpeggione Sonata is rarely heard except in transcription for cello. Antoine Tamestit's transcription for viola is fascinating because the viola is smaller and lighter. Four strings instead of the arpeggione's six, but less body than a cello. I'm not sure what viola Tamestit was using, but he gets a lithe, flexible sound. Like guitars and presumably arpeggiones, violas are readily portable, so Tamestit's freedom brightens the piece and makes it move, perhaps as Schubert might have imagined it. Since the arpeggione's being rediscovered, perhaps we might even hear a concert where arpeggione, viola, cello and guitar transcriptions are played for comparison.  Commercially unlikely, but fascinating.

Sandrine Piau is an outstanding baroque specialist, renowned for the purity of her tone. A background in baroque develops clarity and precision, so her ventures into other repertoire build on these strengths. Her recordings of Debussy songs, for example, emphasize the transparent textures. It's a very French aesthetic, lucidly beautiful. When Piau sings Schubert, her approach works well too. In An den Mond D193 the lustrous sheen of her timbre evoked the moonlight, slowly traversing the landscape. The final strophe, Dann, lieber Mond, dann nimm den Schleier wieder was most effective, for her voice calls out, as if penetrating the darkness. Piau's cool, abstract style sounds like a wind instrument, reinforcing the spirit of this unusual idiom-bending recital.

Nacht und Träume D.827 and Der Taubenpost D965a are so famous as songs for voice and piano that it's quite a surprise to hear them transcribed for viola, especially since the piano part remains the same. It's certainly not a question of what's "better", but more like hearing an alien "voice" with a unique personality. This was specially telling in the latter song where Tamestit's viola catches the cheeky wit in the song, often missed when it's performed as part of Schwanengesang. The viola "sings".

Then, Schubert as opera composer! Romanze der Helene from Die Verschworenen D787 is an extract from Schubert's Singspiele Die Verschworenen (The Conspirators). There's an article about this opera in Opera Today, always a reliable resource . Please read HERE Schubert's libretto is adapted from Aristophanes’ Lysistrata. This is the opening aria, expressing the heroine's longing for her husband, who's away at war. Piau sings it with such feeling that you're won over, though the war in question was the Crusades which are normally romanticized in Christian Europe.

Die Verschworenen isn't familiar except to Schubert devotees, but Der Hirt auf dem Felsen (The Shepherd on the Rock) D965 is one of his best loved. It's quite a shock to hear that evocative introduction with viola instead of clarinet. Bowing instead of blowing! But once you adjust, it's fascinating. Then Piau starts to sing the swooping, elliptical lines that represent the way shepherds project their voices over mountains and valleys. In your imagination, you "hear" the way a bow glides back and forth across strings. Uncanny, the way our senses can cross reference each other.

What an enjoyable, stimulating concert, and probably unique. Listen to it on demand online for 11 days on BBC Radio 3. There is also a new CD with the Arpeggione Sonata and other transcriptions, featuring also Tamestit, Piau and Hardulla. This review will also appear shortly in Opera Today, the leading vocal and opera site.  This is the formal, proper review in Opera Today.
at March 02, 2011

Thanks for telling us about this. I'm enjoying it immensely via internet rebroadcast. In answer to your uncertainty about the nature of the viola being played, I recall the announcer saying it was a Stradivarius.